To me, London is one of the most well rounded food cities in the world, with a melting pot of cultures, you can eat the best of gastropub food to French to Lebanese, Indian and Chinese food. And of course, there is also so many choices for good solid breakfast and tea places, I mean they really take their afternoon tea very seriously with the annual tea guild awards. I visited some new and old favourites when I was there this late March to April with Y.

Quite a talked about establishment in London is Duck and Waffle, located in the Heron Tower (Heron Tower, 110 Bishopsgate, London EC2N 4AY) in the business district area and opens 24 hours daily! Its location on the 40th floor gives one a 360 degrees view of London city including the er-hem rather phallic looking Gherkin. I figured the view in the morning is probably the best for my first time and I headed there for breakfast. This place has been busy at all hours, and I would advise for dinner book 1 month in advance, it’s not one of those places you can just stroll into and get a table unless you are there at wierd hours of the morning. 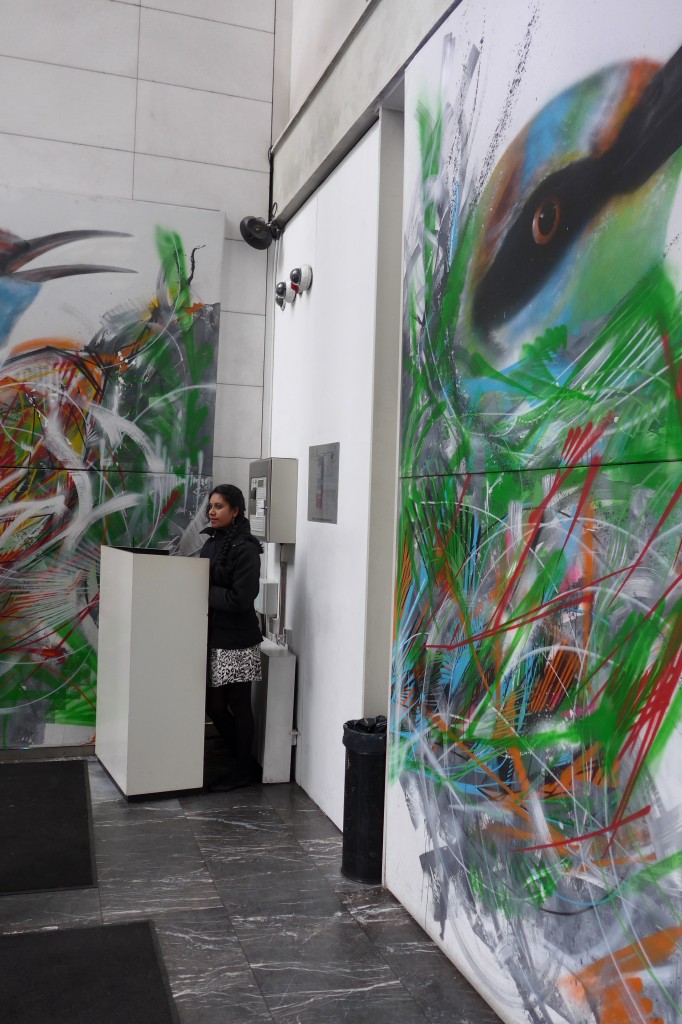 Cool graphics greet me at the entrance lift lobby. 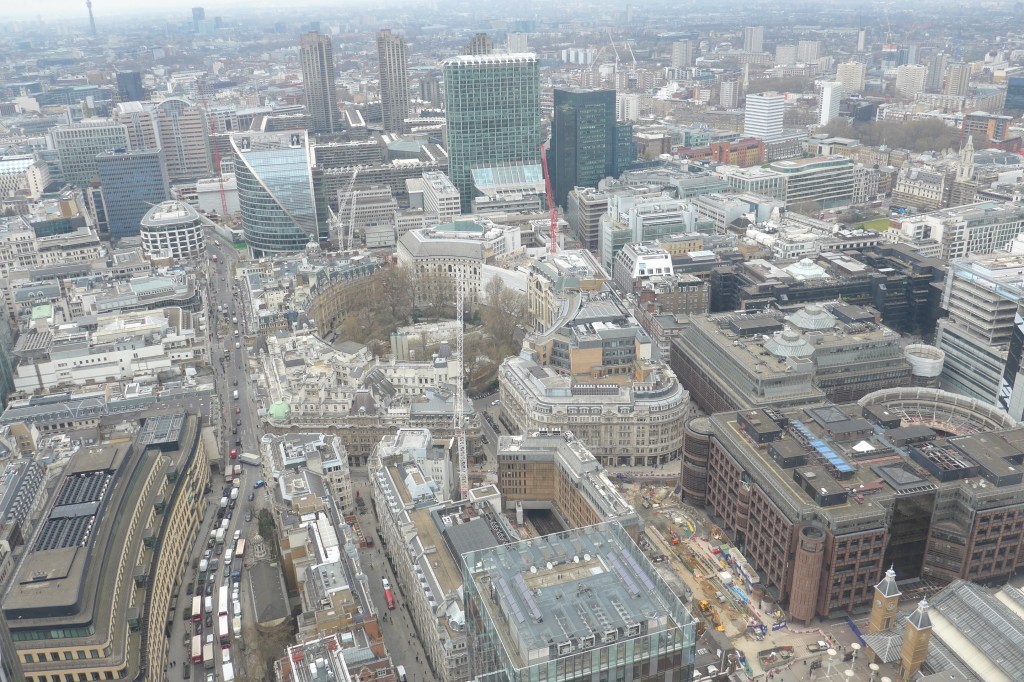 View of the city from the lift shooting up fast to the 40th floor.

After going through a long corrider passage, a nice airy space where their bar was located greeted me. I love their printed mixed tiles for flooring and the wood beams used here. I was then ushered into the dining hall. 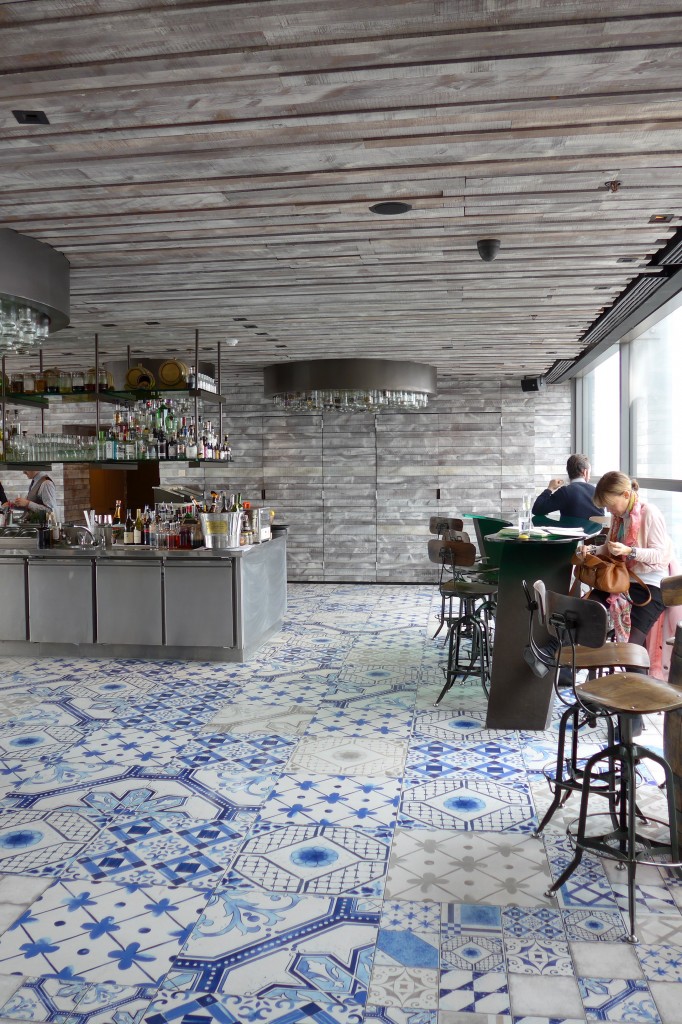 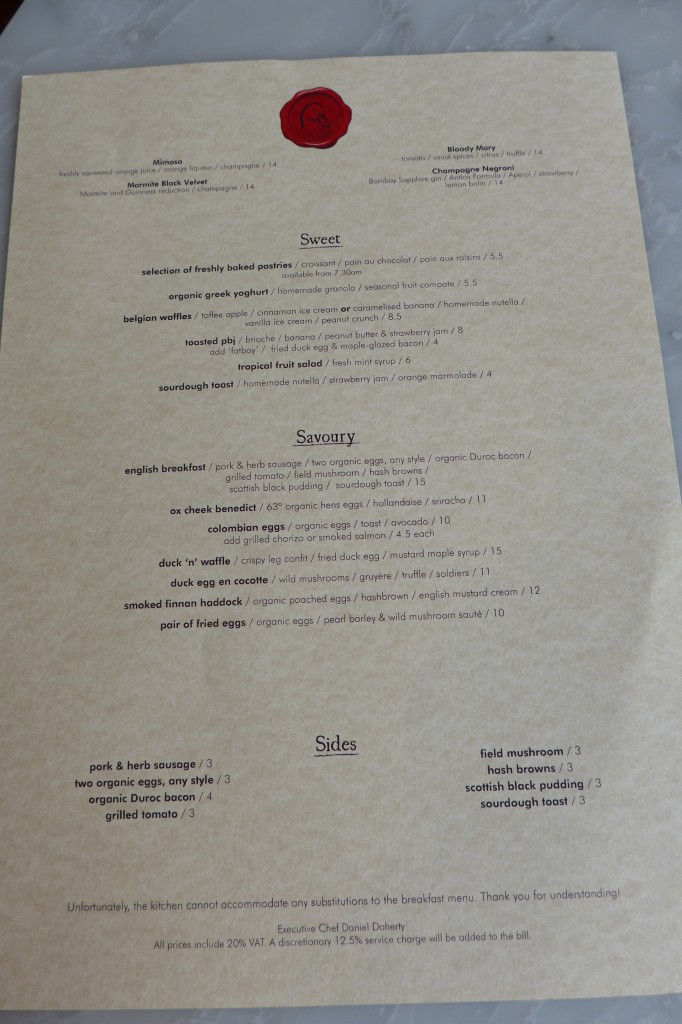 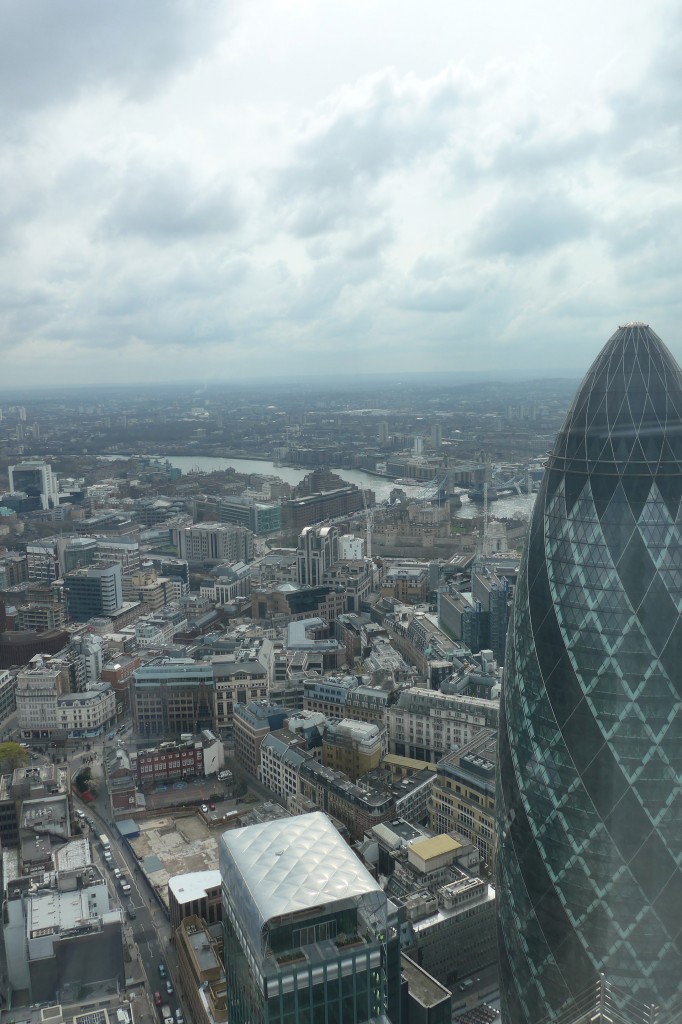 View of London skyline and The Gherkin from my table.

Of course,  I had their eponymous dish with freshly squeezed blood orange juice on the side – I love this fruit and unfortunately it’s not so easily available back in Singapore. Crispy duck leg confit sitting on a waffle with fried duck egg and their homemade mustard maple syrup – deathly delicious, it was surprisingly as good or even better than fried chicken with waffles combination. The picture below speaks a thousand words, need I say more? 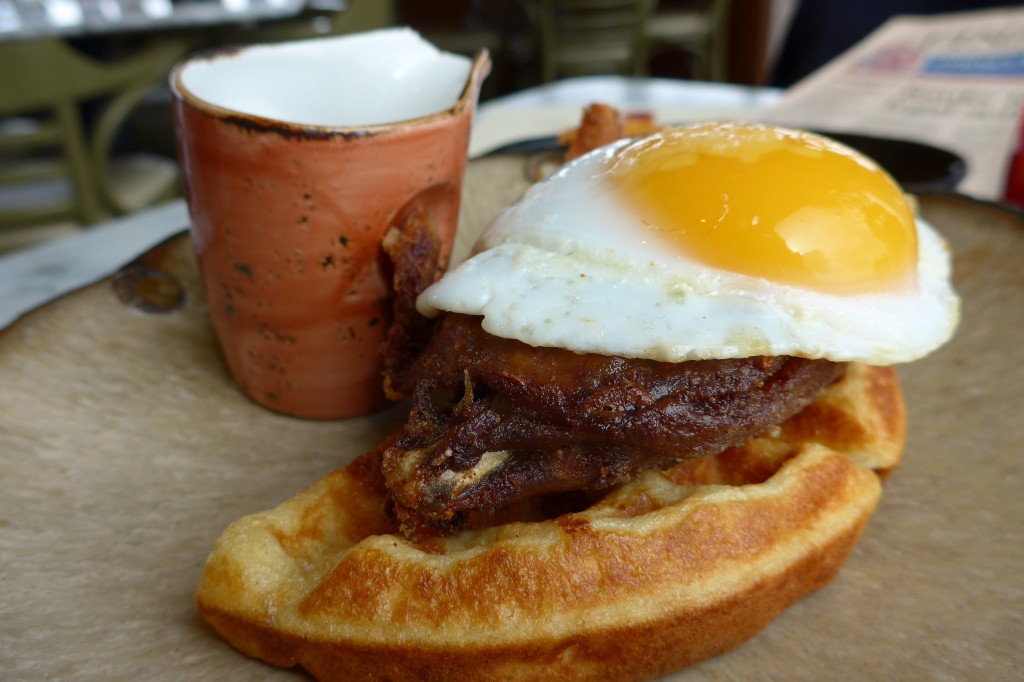 If you are in a hurry, or want to have something light, I always try to pop in to Ottolenghi to have a simple pastry or cake from their vast selections, whether it’s breakfast or tea. They are quite an institution, with Yotam Ottolenghi at the helm, the food is healthy and delicious free of preservatives and additives. I like going to their Belgravia location (13 Motcomb St, London SW1X 8LB, United Kingdom; Phone:+44 20 7823 2707), a tiny small deli more of a takeaway place with only seating for 10, but would love to see their Islington next time which also serves dinner. Had to secretly take photos on my Iphone as they are sticklers about taking photos inside. 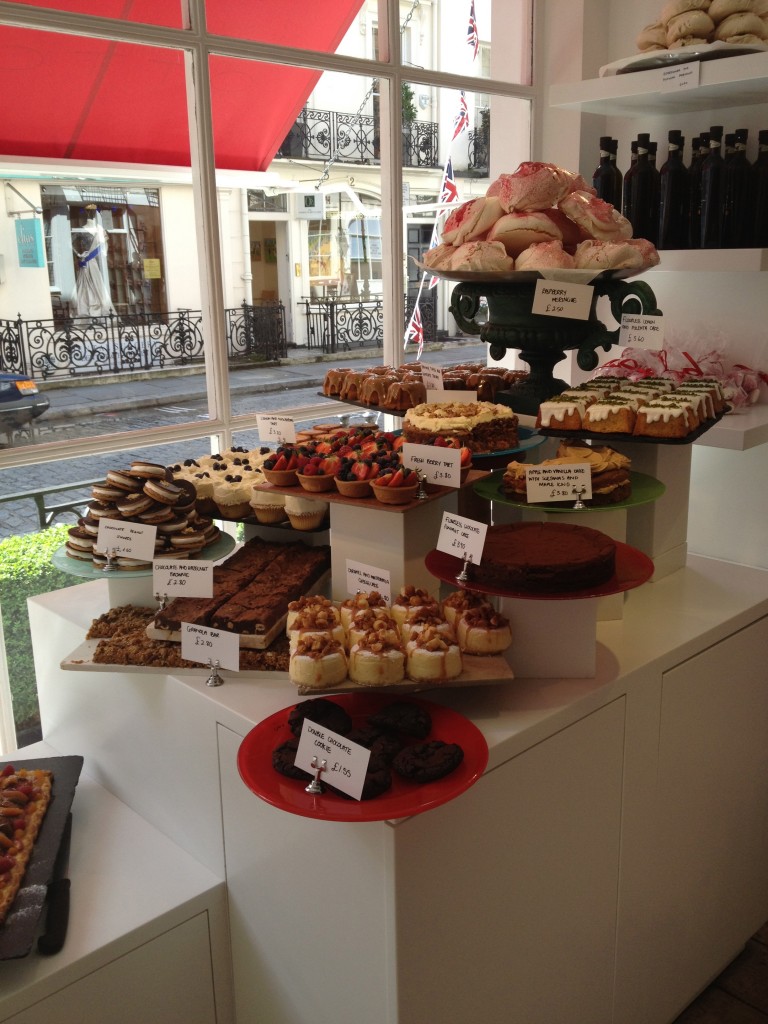 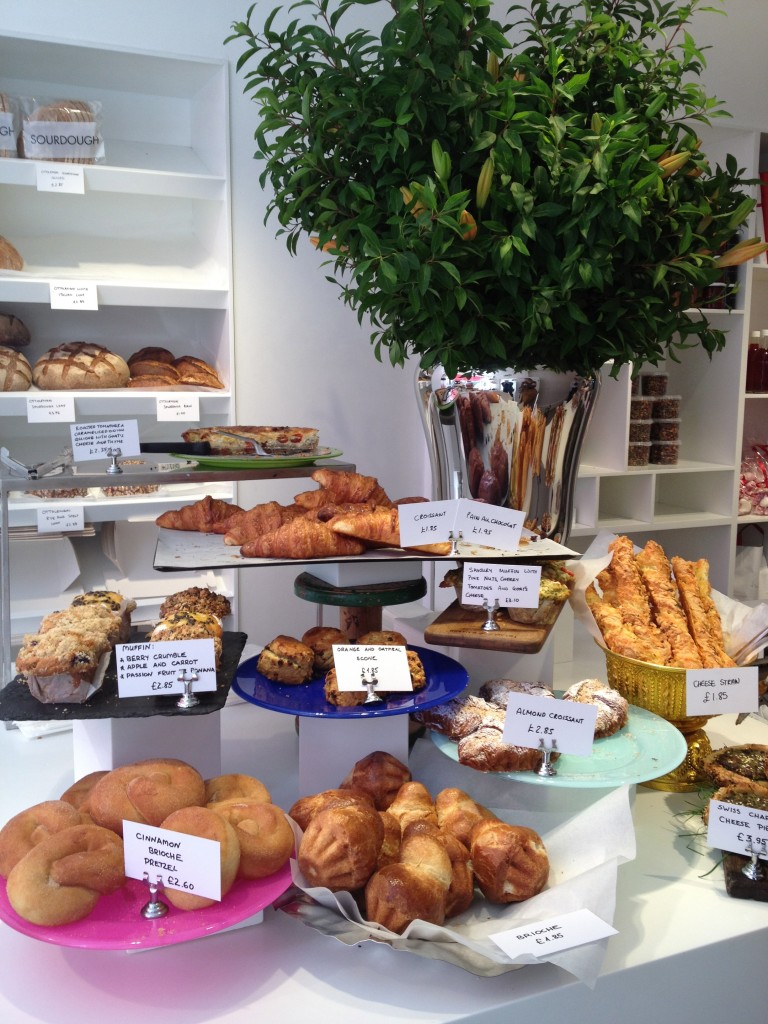 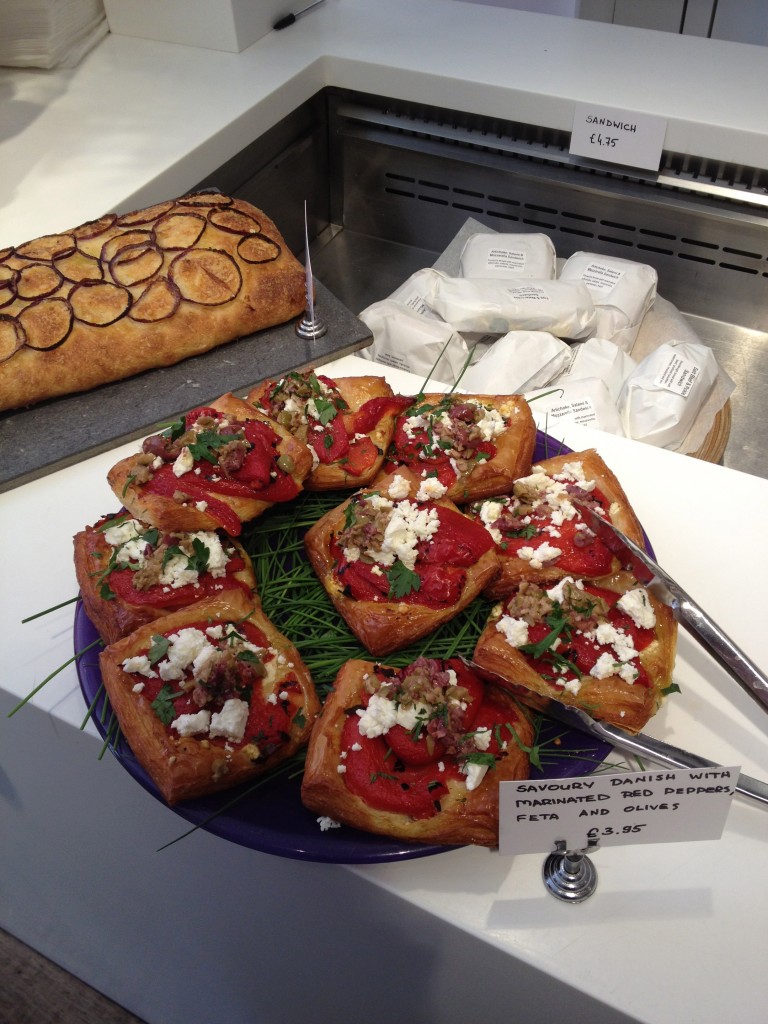 On our last day in London, MC took us to Gail’s Kitchen and the adjoining Gail’s Bakery in the boutique hotel MyHotel Bloomsbury, a 5 mins walk from the Tottenham Court Road tube station. Gail’s Bakery is well known for their cakes, breads and pastries and they have done very well with Gail’s Kitchen which won a Michelin Bib Gourmand in 2013. There’s a nice relaxing airy vibe to the restaurant and so glad I had made a booking for us, as they were pretty busy, expected for a Saturday. I was drawn to their source of ingredients at the bottom of the menu which to me always does show the quality of the food produced in the establishment. MC had the Shashuka eggs and I shared with Y the dish with CORN BREAD – think they won me over with just these 2 words. When I thought I couldn’t eat anymore, we still went over to Gail’s Bakery and I took away half a dozen hot cross buns and carrot cake, great for my trip back home. 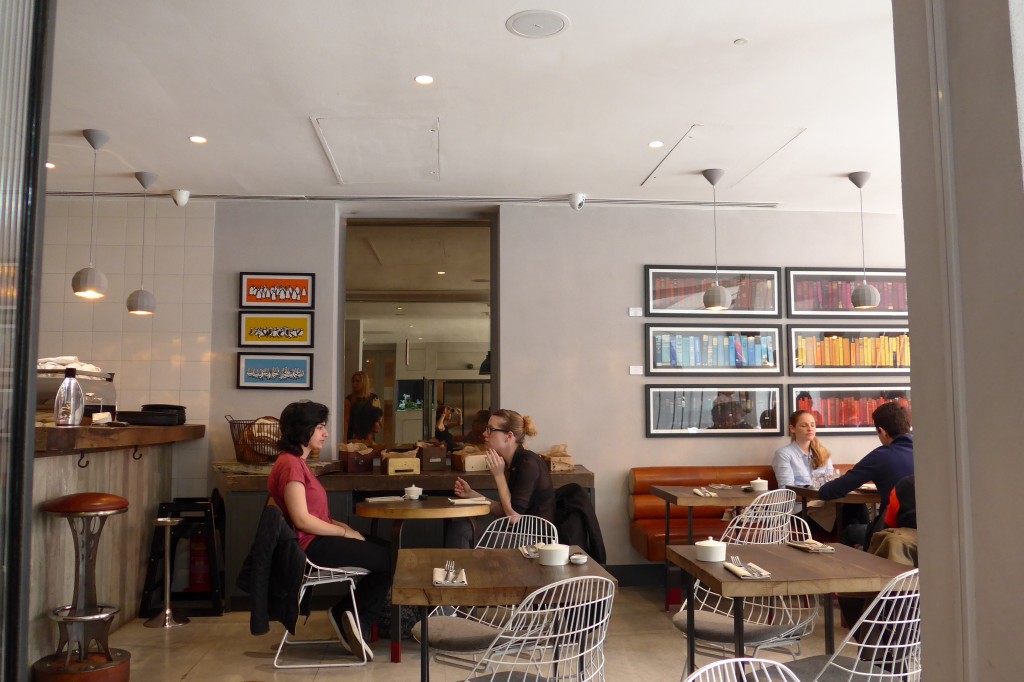 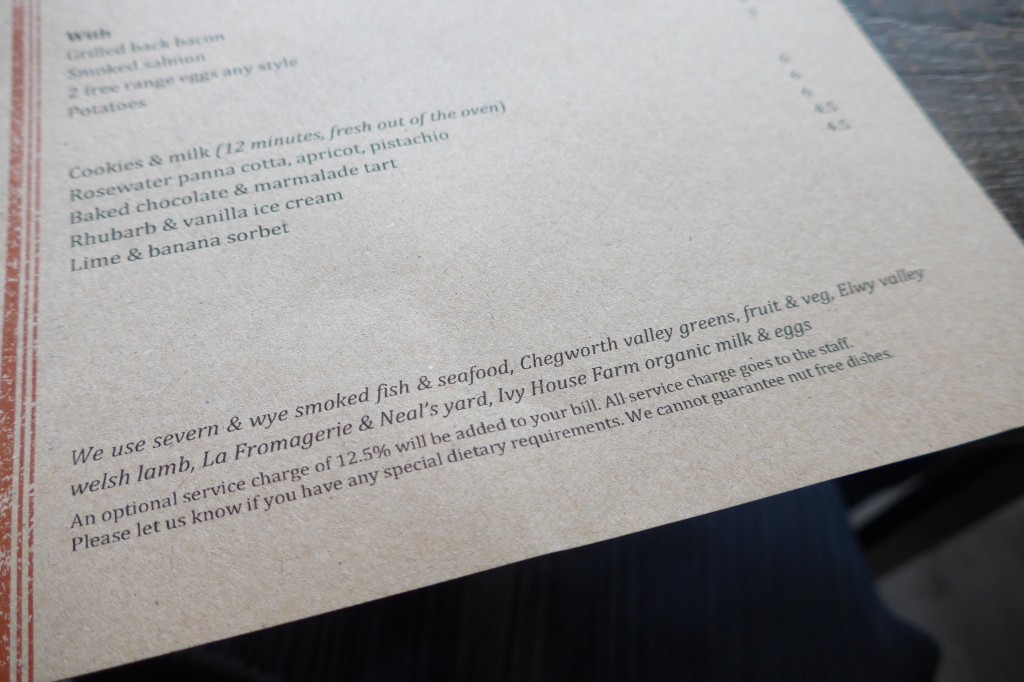 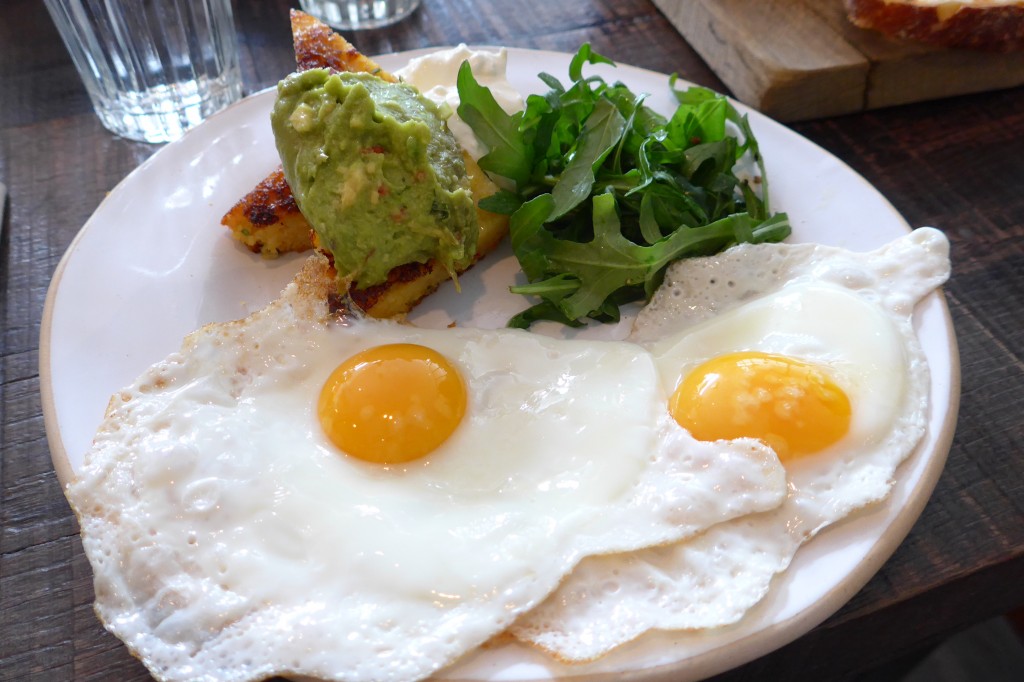 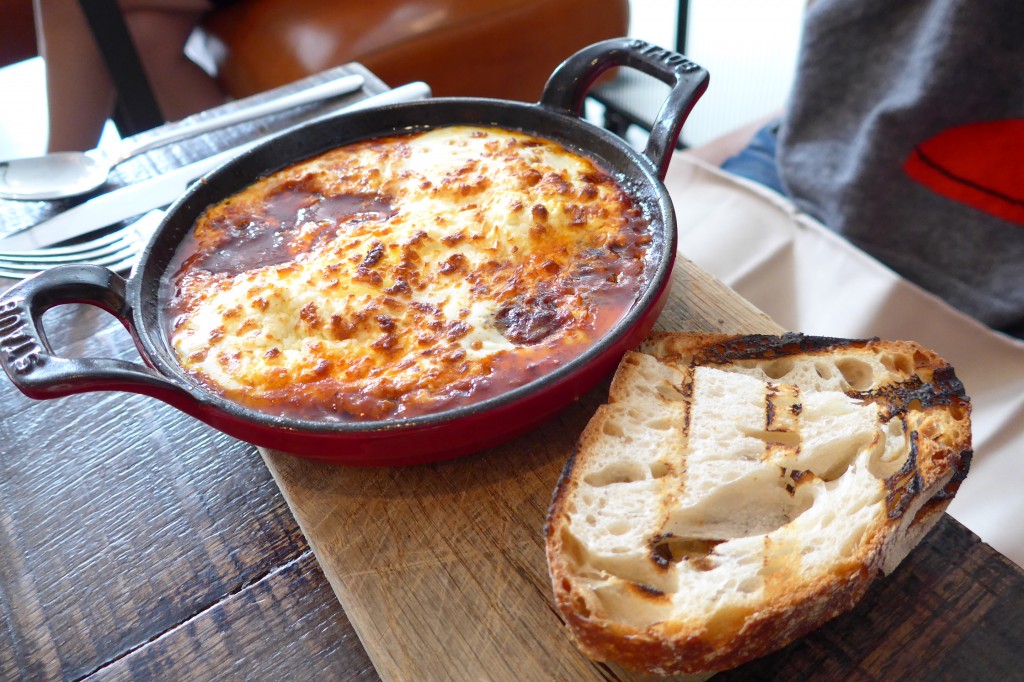 Shashuka eggs – I had to try some so good… 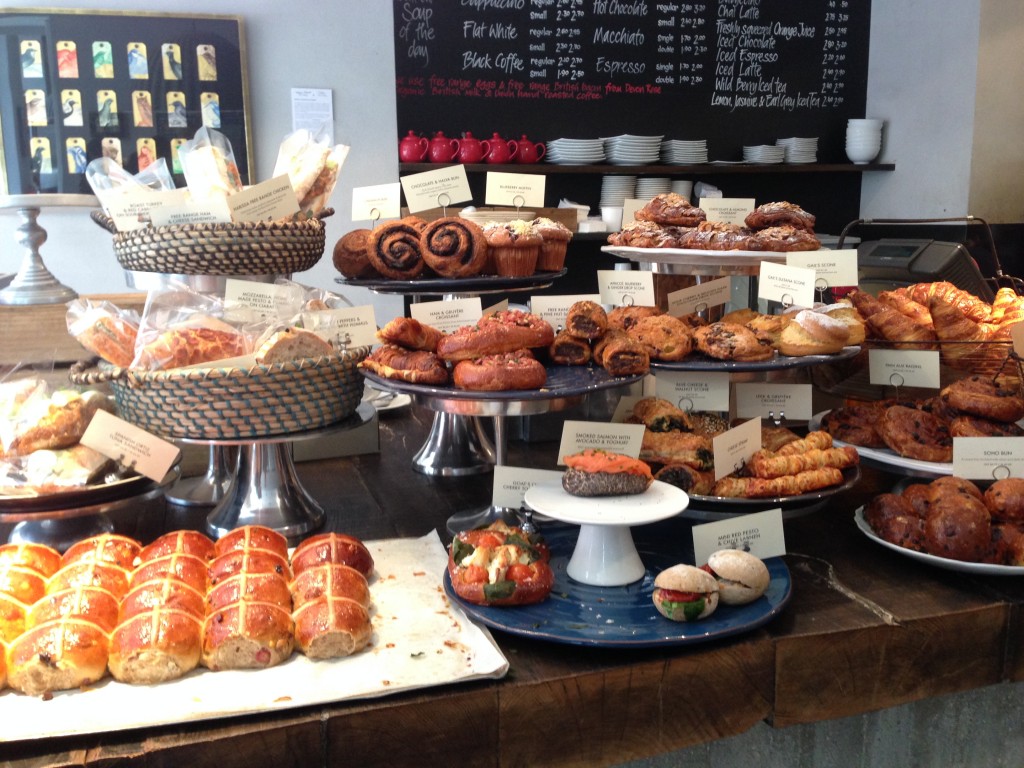 Moving on to afternoon teas, there’s such a vast selection of choices it’s hard to decide. Having always gone to The Wolseley and Claridges Hotel for my scones and clotted cream fix, I decided to try The Dorchester (53 Park Ln, London W1K 1QA),  helped that it was conveniently located just a 5 mins walk from where we stayed at Intercontinental Parklane. It can get exhausting just walking around in London, and relaxing over afternoon tea is just fab! The service here is excellent, very thoughtful and friendly, one of the wait staff was concerned Y and I be bored and they gave us some magazines to keep us occupied and also chatted with us and asked us where we were from. 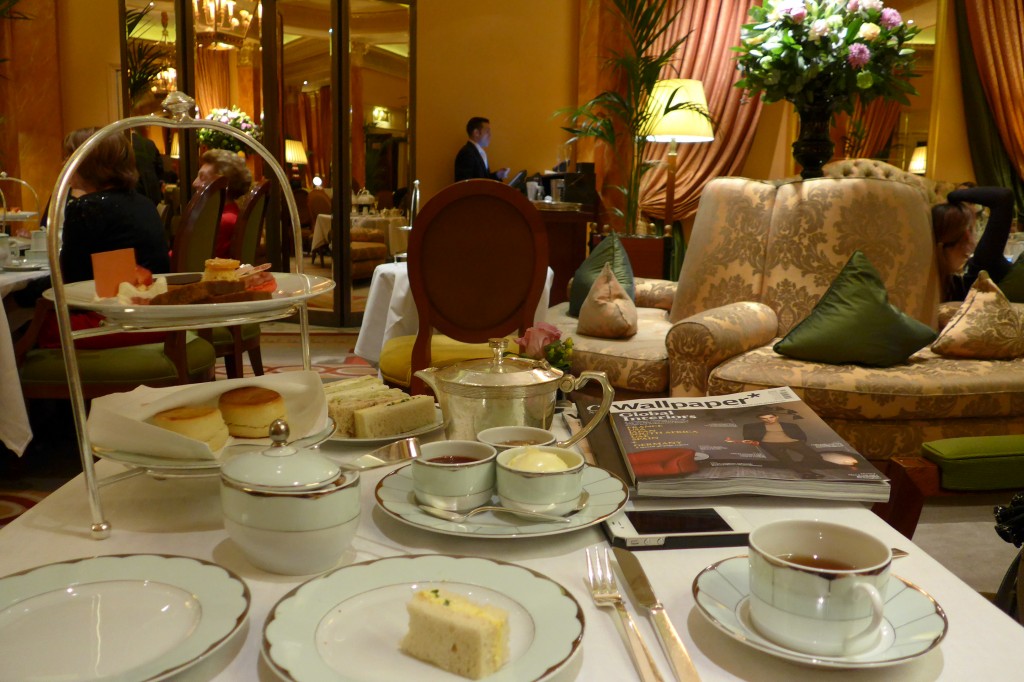 We had the traditional afternoon tea, I felt like I was having a food marathon, had to pace myself through the endless serving of sandwiches before the much awaited scones arrived. The clotted cream was heavenly with the jam, ah I so miss it. Eating this at 5.30 pm also meant there was no way I could make it for my degustation dinner at Story by Tom Sellers at 9.15 pm, and sadly I had to cancel it. 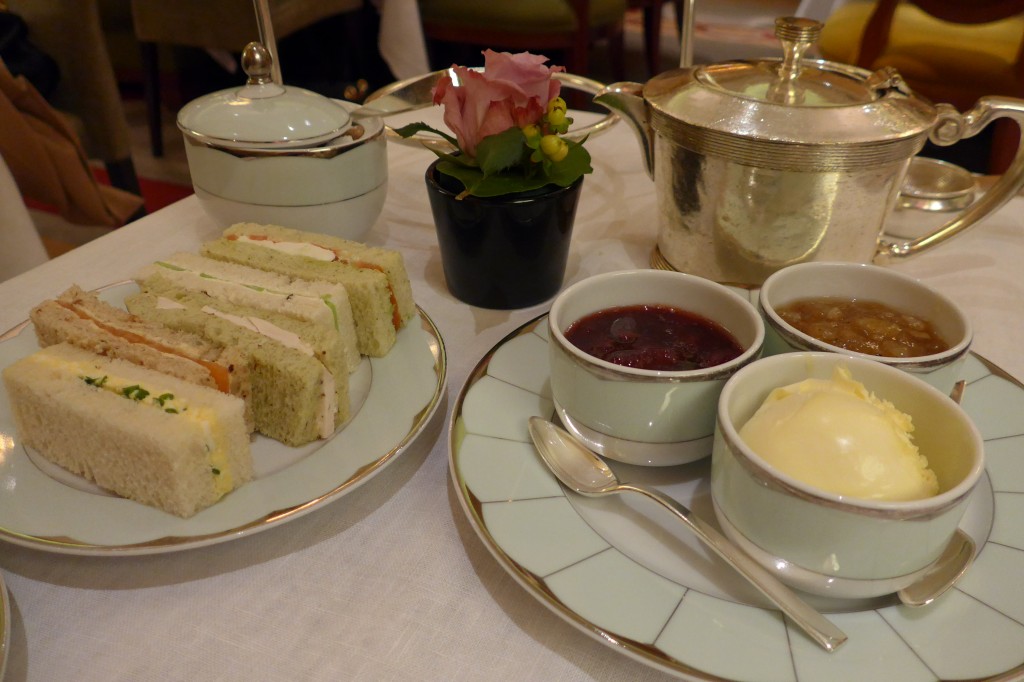 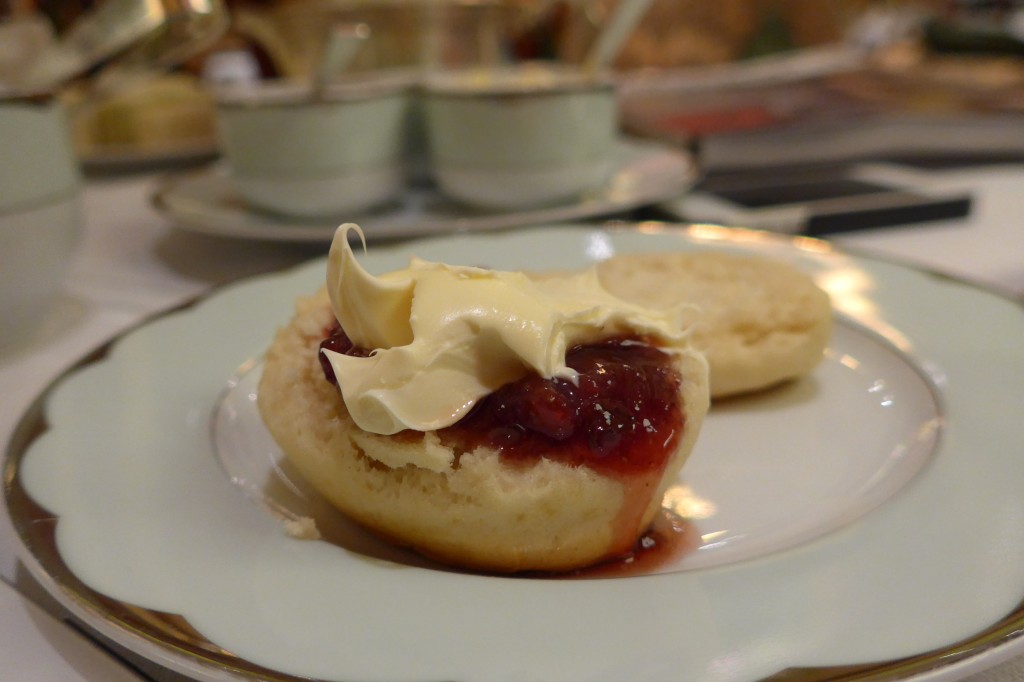 Scones with clotted cream and jam at The Dorchester Okay, this last one doesn’t seem to belong here, but it does! I love the gelato from Gelupo (7 Archer Street, W1d 7AU) by the same folks from Bocca Di Lupo, one of my favourite Italian small plates restaurant. I love coming here anytime especially in the late afternoon or after dinner. After Y’s cousin VL brought us here 2 years ago, we were hooked! Their rice flavour is one of the best but this trip I had the Ricotta Stracciatella – a light cheesey creamy flavour with Bonet – a nice rich chocolate flavour.  They also stock a great selection of produce including my favourite ‘Ricco’ Balsamic Vinegar – a must to buy back if you like thick sweet syrupy balsamic vinegar. 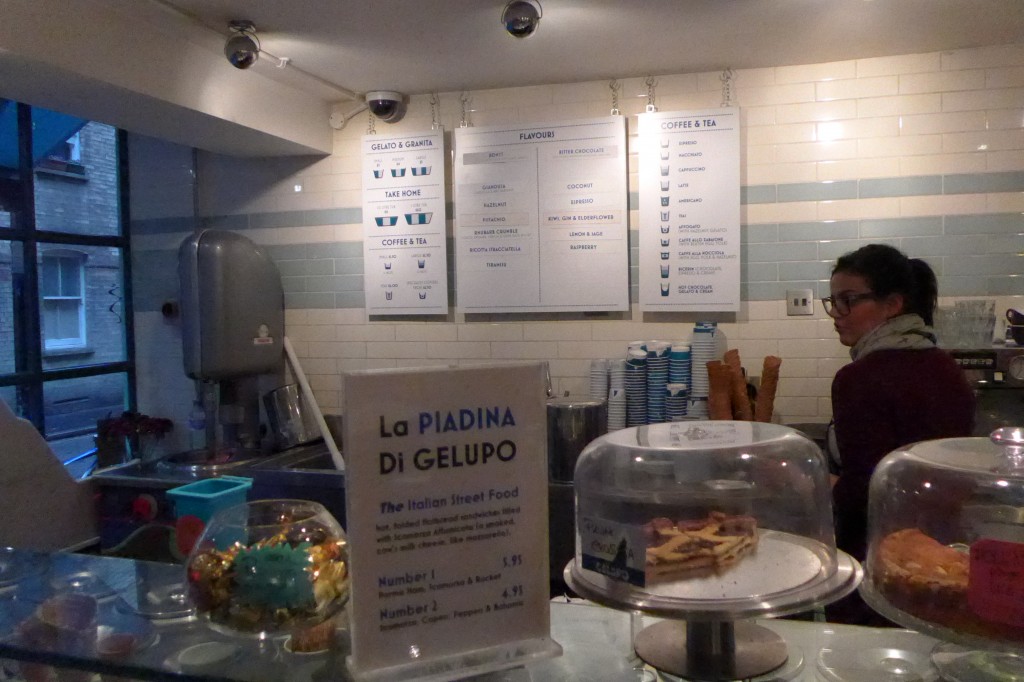 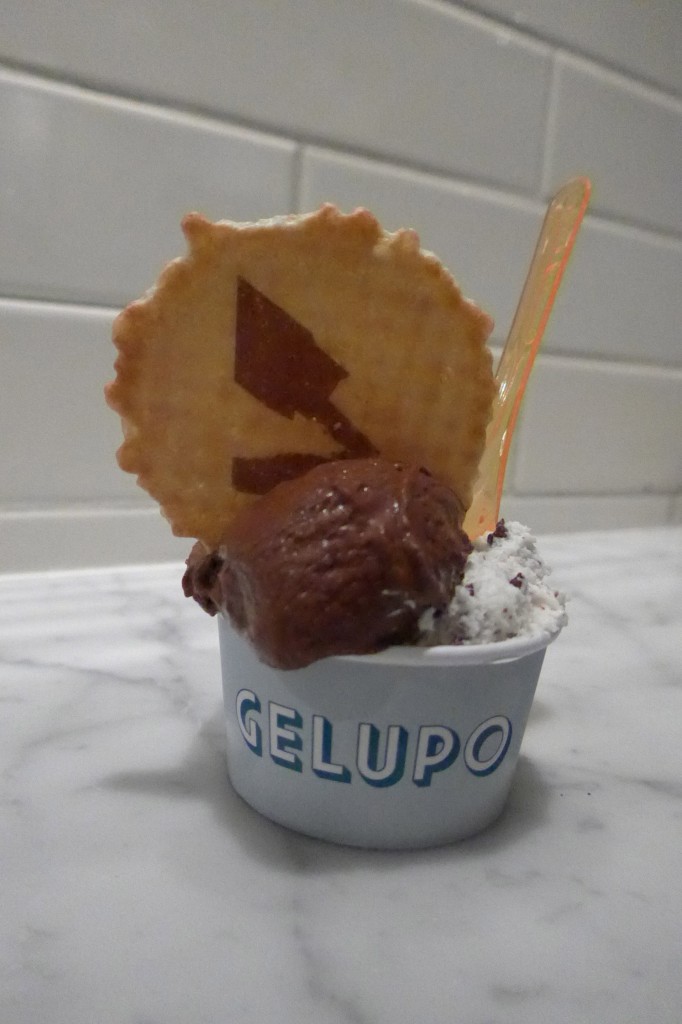 Look out for my other post on dinners in London featuring The Clove Club and Kitchen Table. 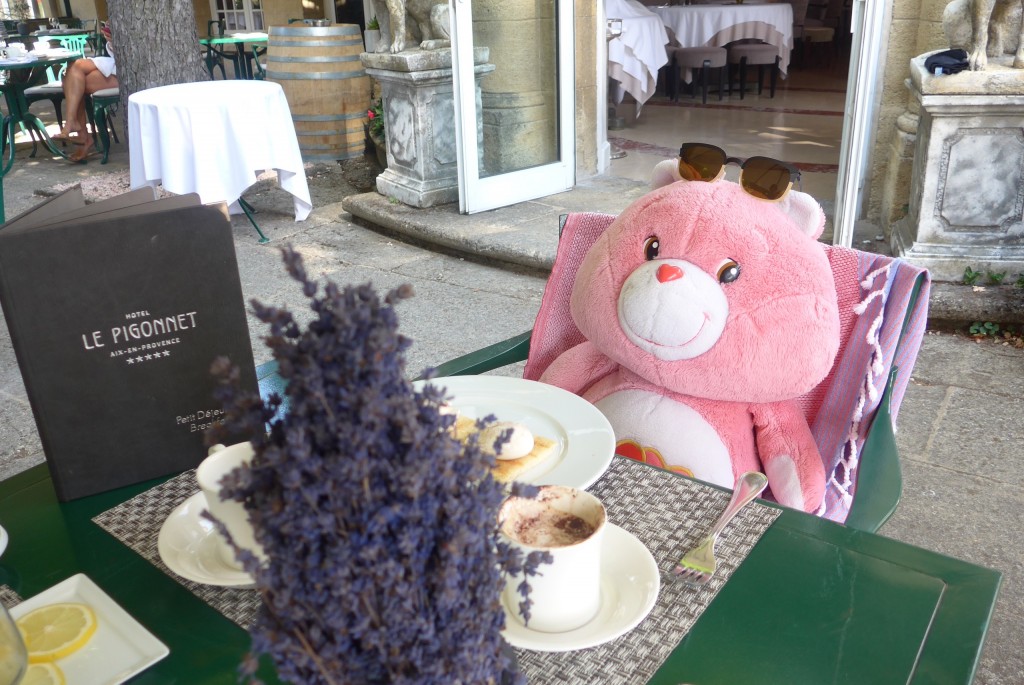 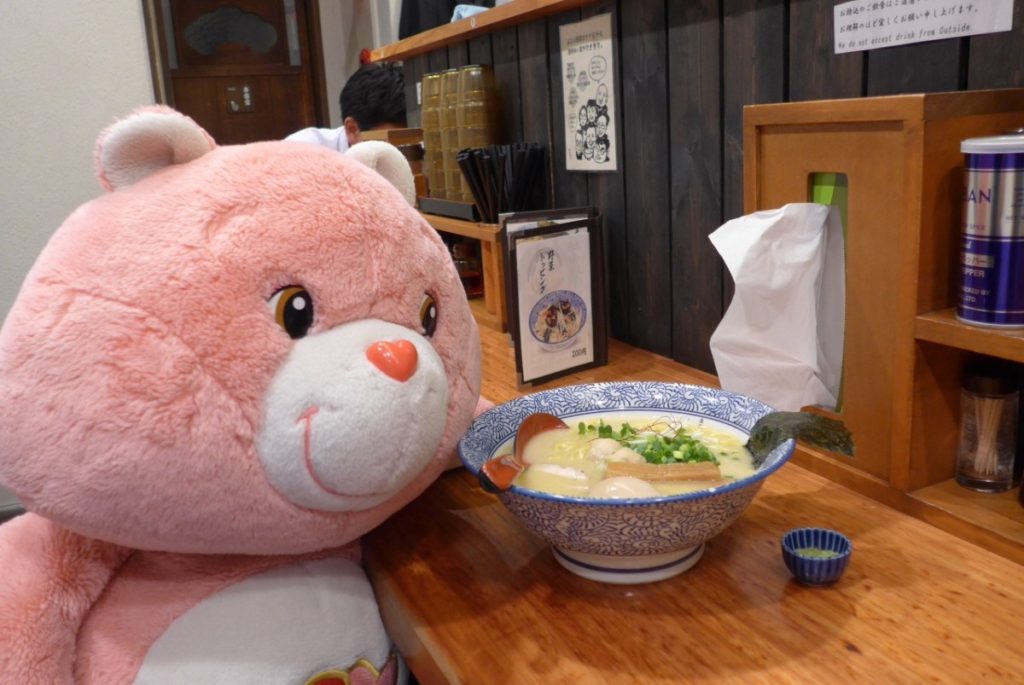 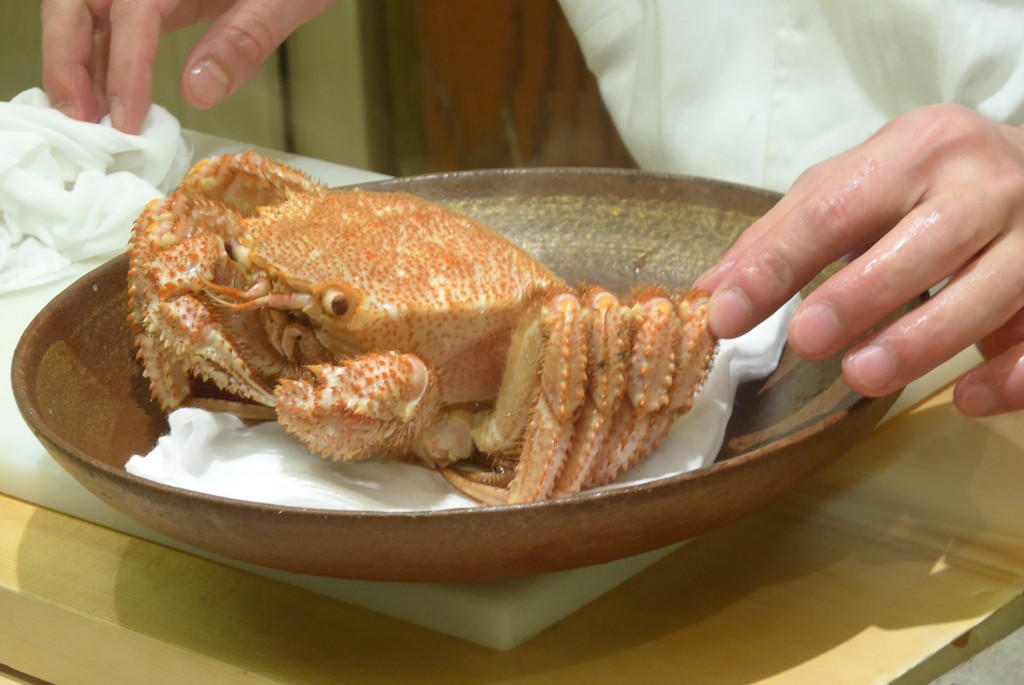