On our second day in Takefue Ryokan, being the explorer in me, I wanted to explore some of the famous sights nearby such as the active volcano Mt Aso. I had read up that there’s a Mt Aso Cable car we can take, which is the best spot for viewing this famous active volcano, but unfortunately it has been closed for the recent months as it was deemed unsafe. Hence, K our trusted concierge from Takefue Ryokan, advised us we could go to the Mt Aso Volcano Museum where it’s surrounding grassland had the best views of Mt Aso. So off we went!

After a 15 mins drive from Takefue, we chanced across what seem like an endless display of Edward Scissorhands like garden sculptures of birds, dancing bears. Y and I pranced towards the sculptures the moment we arrived there, felt rather surreal, it was really like we had walked onto a movie set of Edward Scissorhands (one of my favourite movies from Tim Burton starring Johnny Depp released 1990). 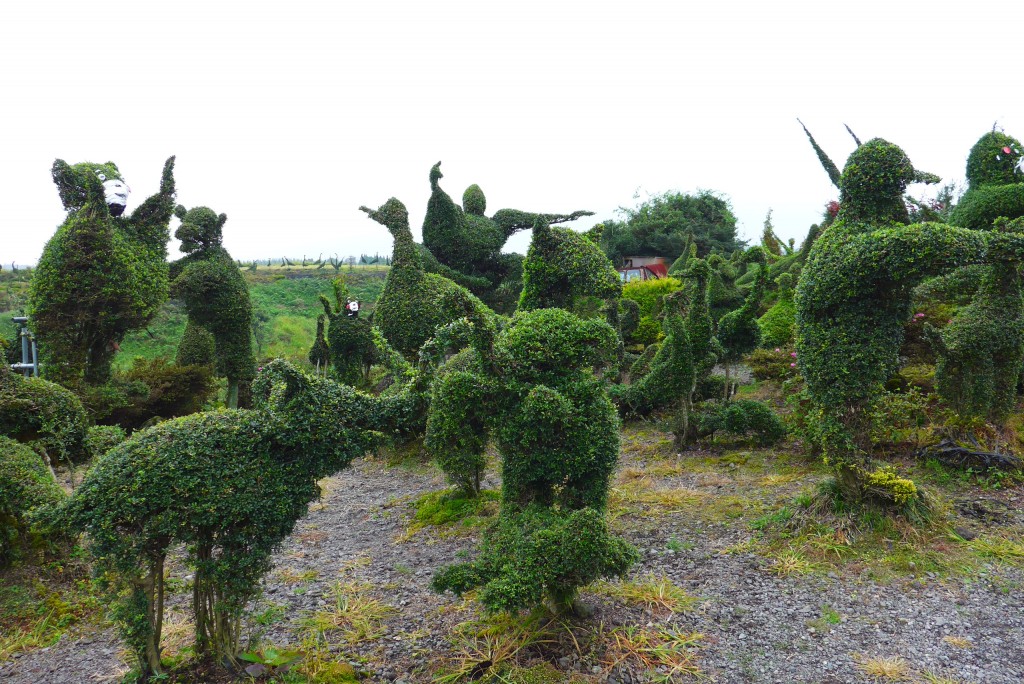 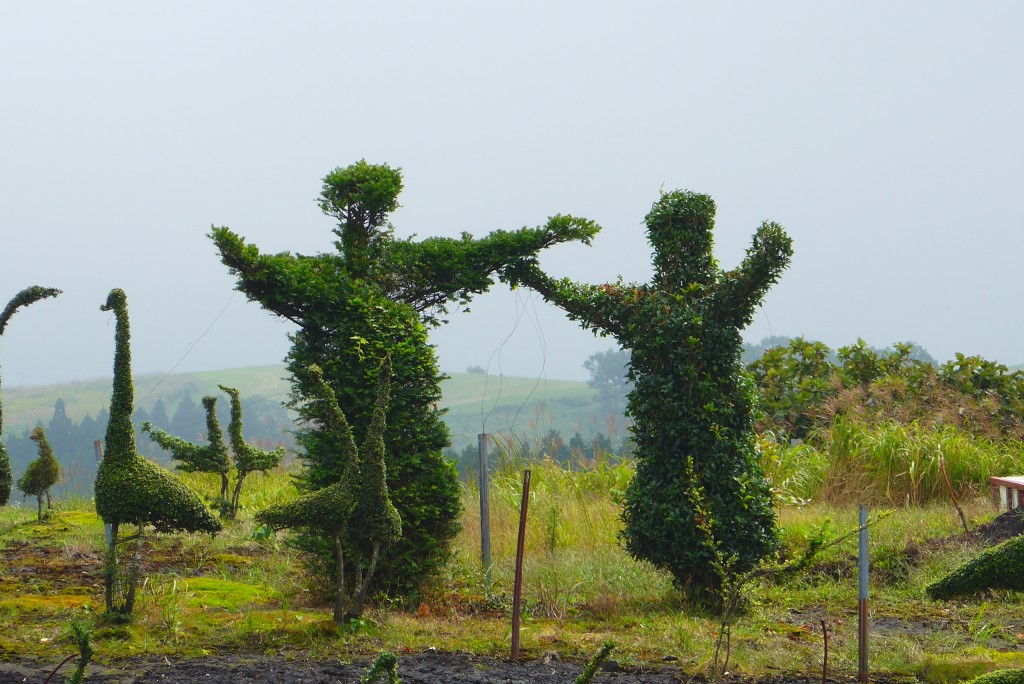 This reminds me of R and Y. 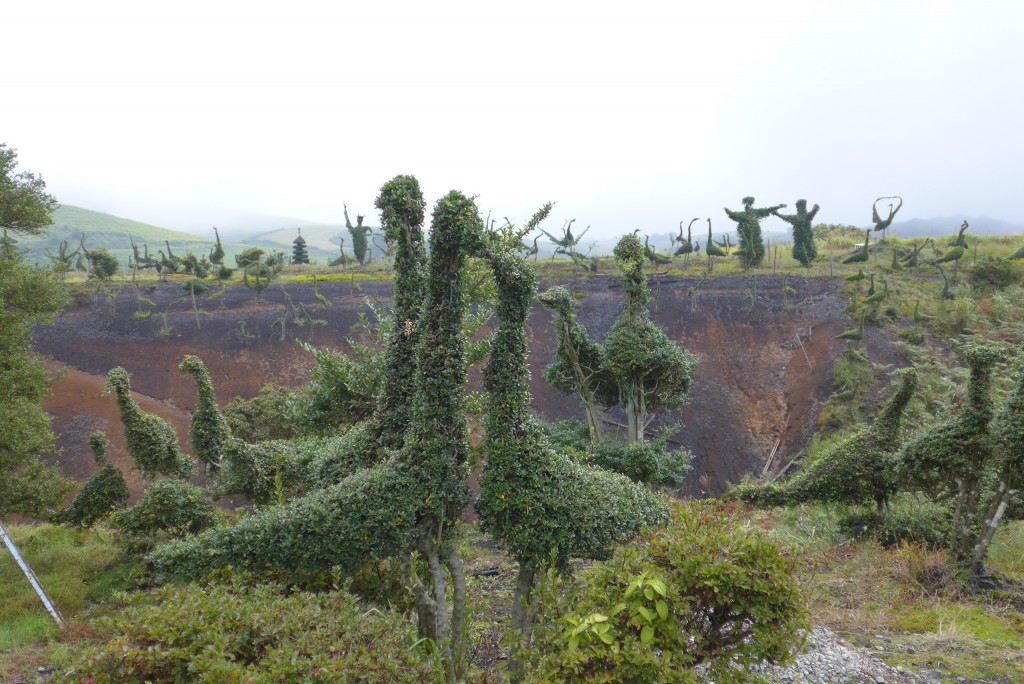 Birds, Cranes you name it 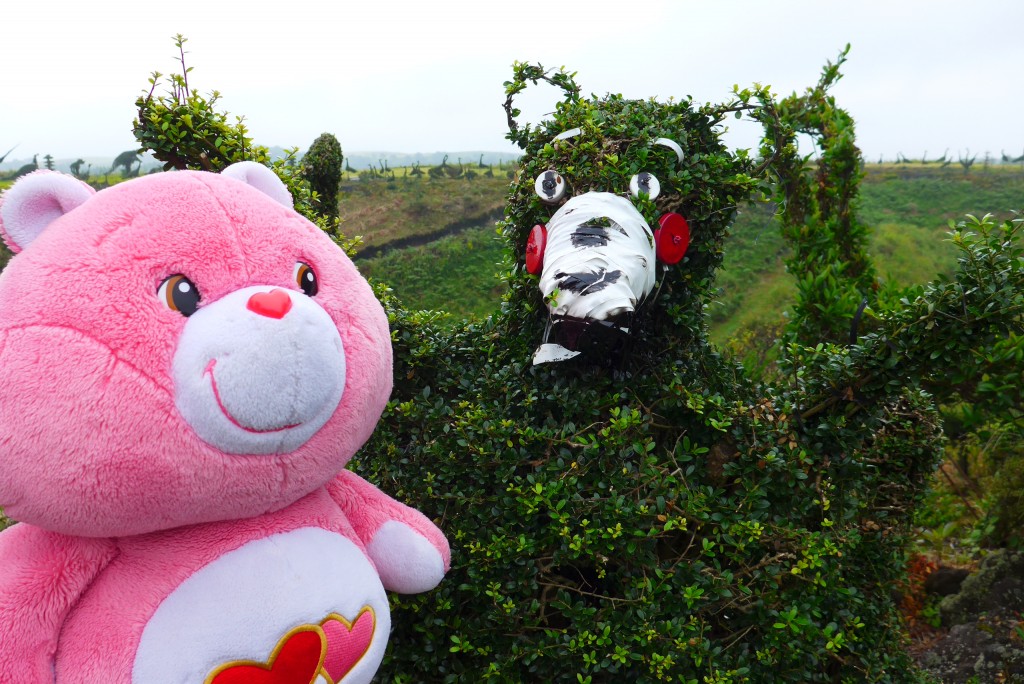 Is that a garden Kumamon bear?

After taking many snap shots of the various garden sculptures, we continued on our drive to Mt Aso. The drive was very scenic, marked by lots of mountain roads with endless rows of cedar trees flanking them. Driving a convertible in this autumn wind with the fresh smell of the cedar trees would have been perfect, but our good ol’ rented Nissan March was efficient enough for us, especially given it started to pour later.

Mt Aso’s caldera, with a circumference of over 100 kilometers is one of the largest in the world and contains multiple rural towns and endless rice fields. We chanced across such amazing views of the rice fields as we were going around the roads towards Mt Aso. 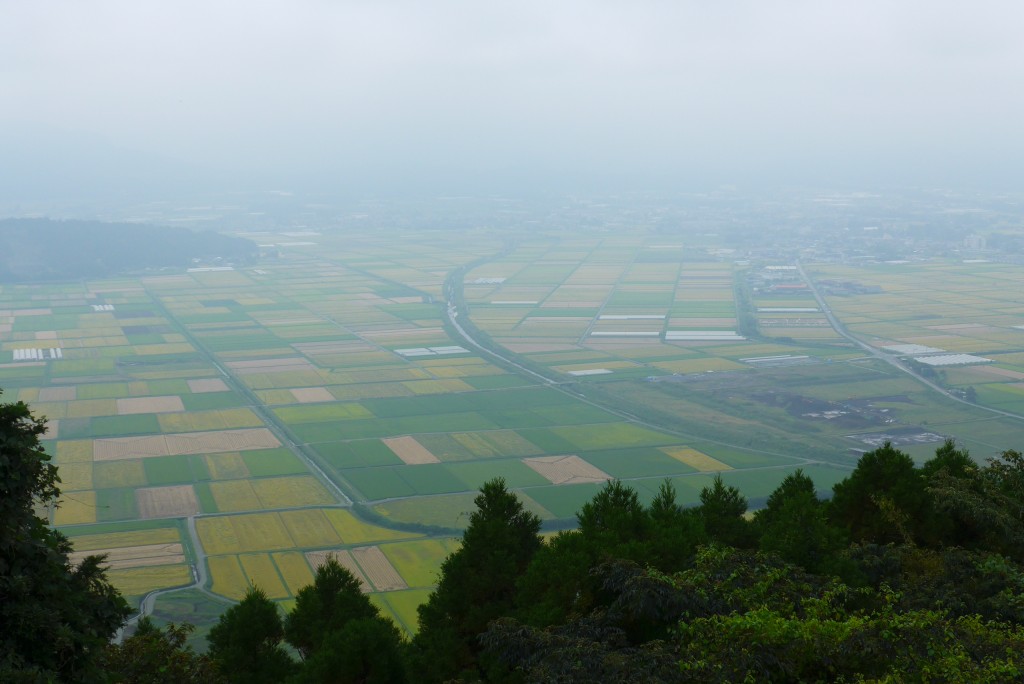 Bountiful rice fields in the caldera of Mt Aso.

The surroundings of Mt Aso are marked also by many grassy slopes and green pastures with horses, cows grazing away, making many of the angles of the various surroundings picture perfect for that scenic shot. 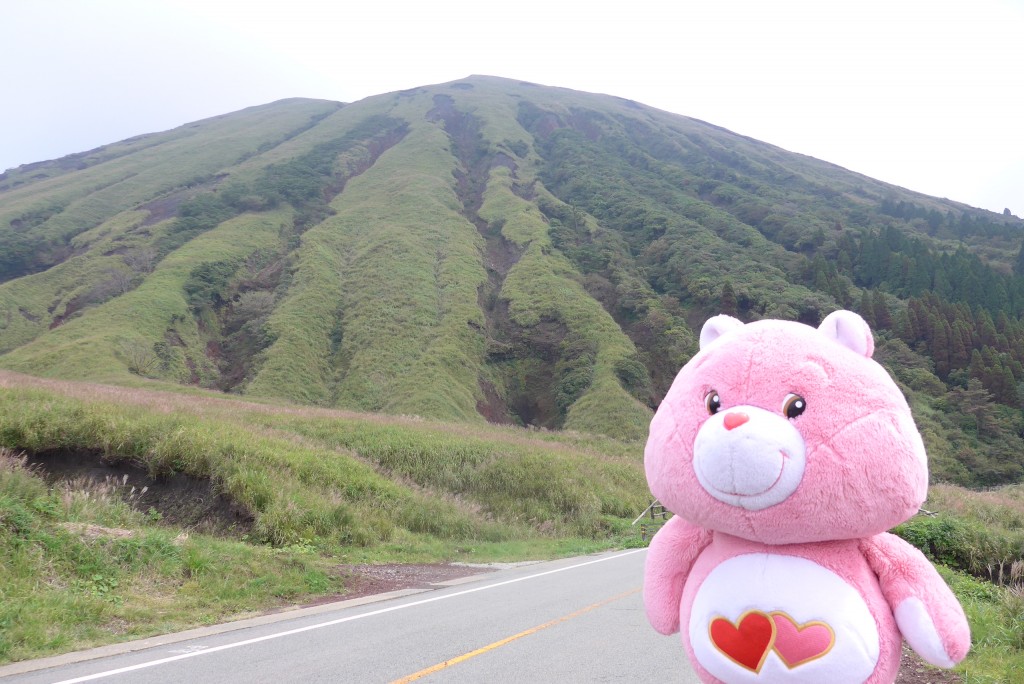 Posing in front of the one of the many grassy slopes near Mt Aso. 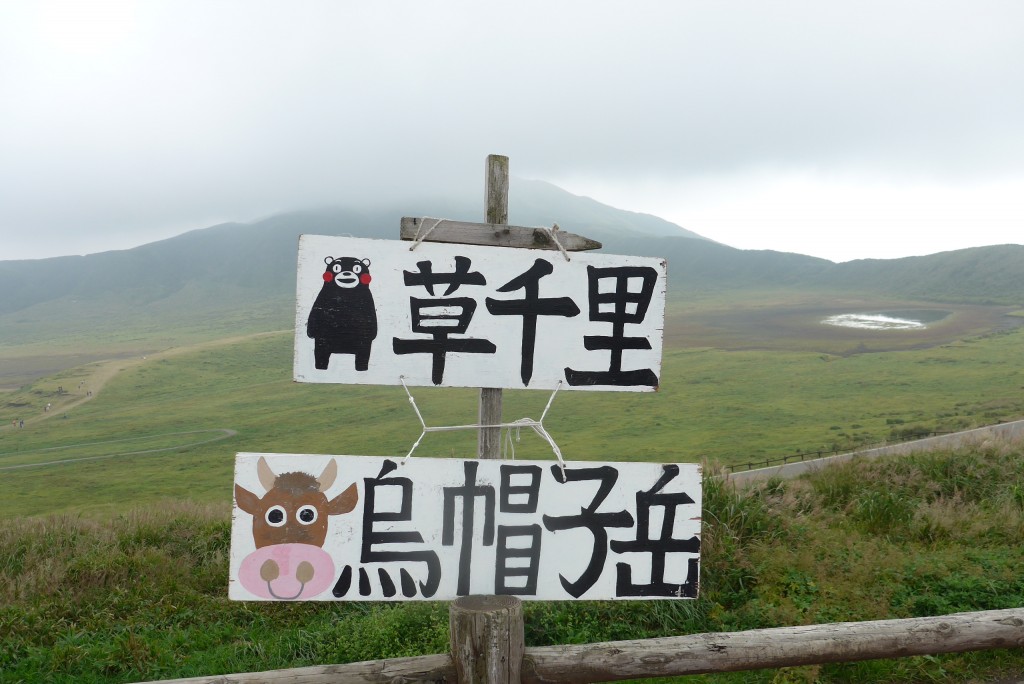 Kumamon pointing us to the right direction as we continue our drive up. 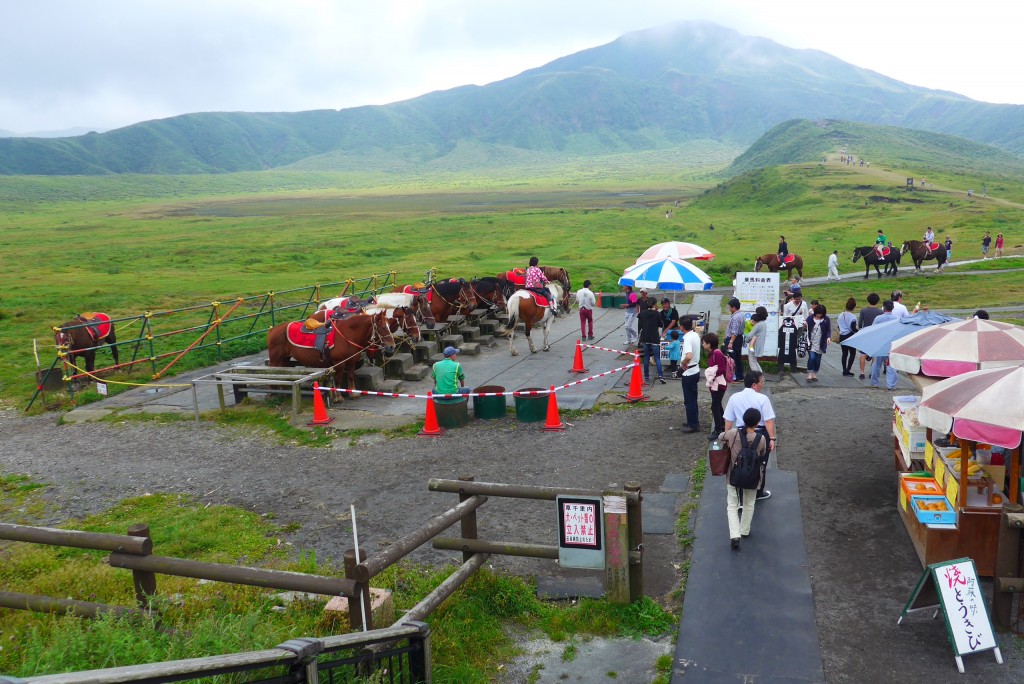 We finally found a large parking space where there was a large tourist shop to buy the local goods and a Mt Aso Volcano Museum which explained the background of Mt Aso. Opposite the museum was the extremely large Kusasenri-ga-Hama (785,000 square meters), where a vast grassland spreads out widely at the foot of the impressive Mt. Aso. The ponds here are said to have been created by rainwater. As we had arrived rather late, we focussed on walking towards the green slopes and enjoying the views and taking some photos till it started to rain more heavily and we had to make a dash for the car. From what I read, Mt Aso is not one single mountain but rather a central crater group made of five Aso peaks – Mt. Taka, Mt. Naka, Mt. Eboshi, Mt. Kijima, and Mt. Neko. At this area, one can view the 5 peaks. 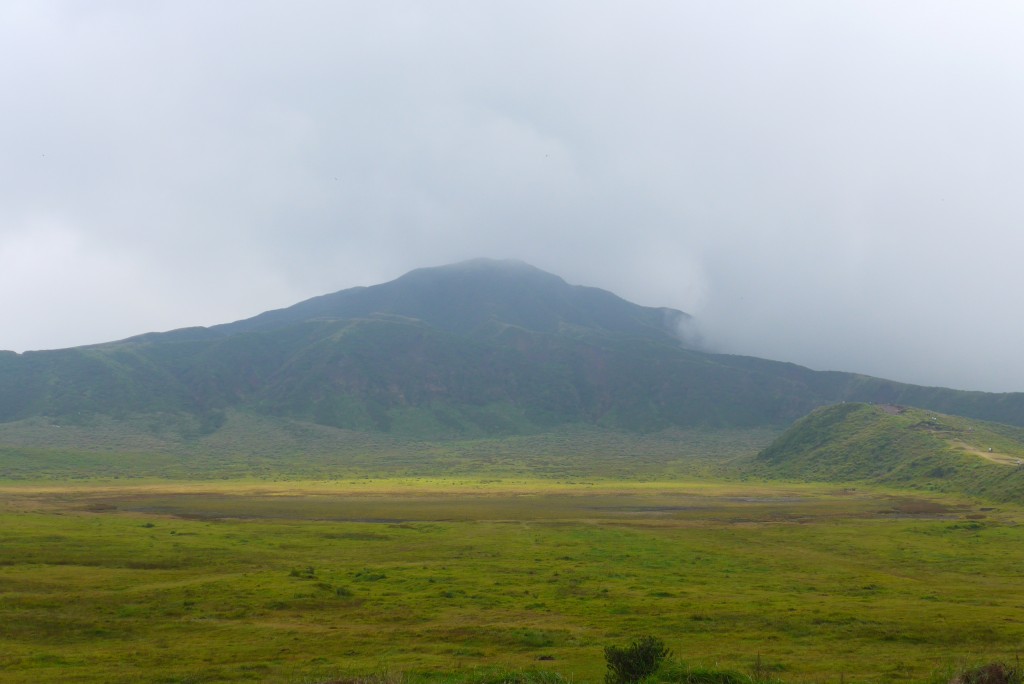 Air was rather misty, but managed to snap a pic of one of the mountains. 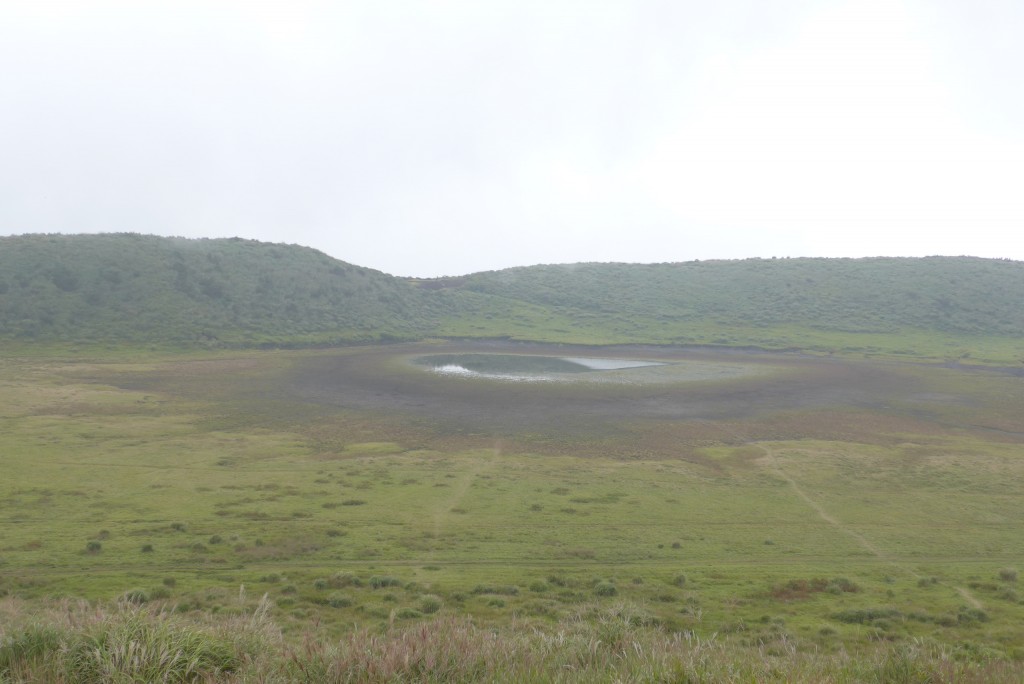 One of the ‘ponds’ spotted in the grasslands. 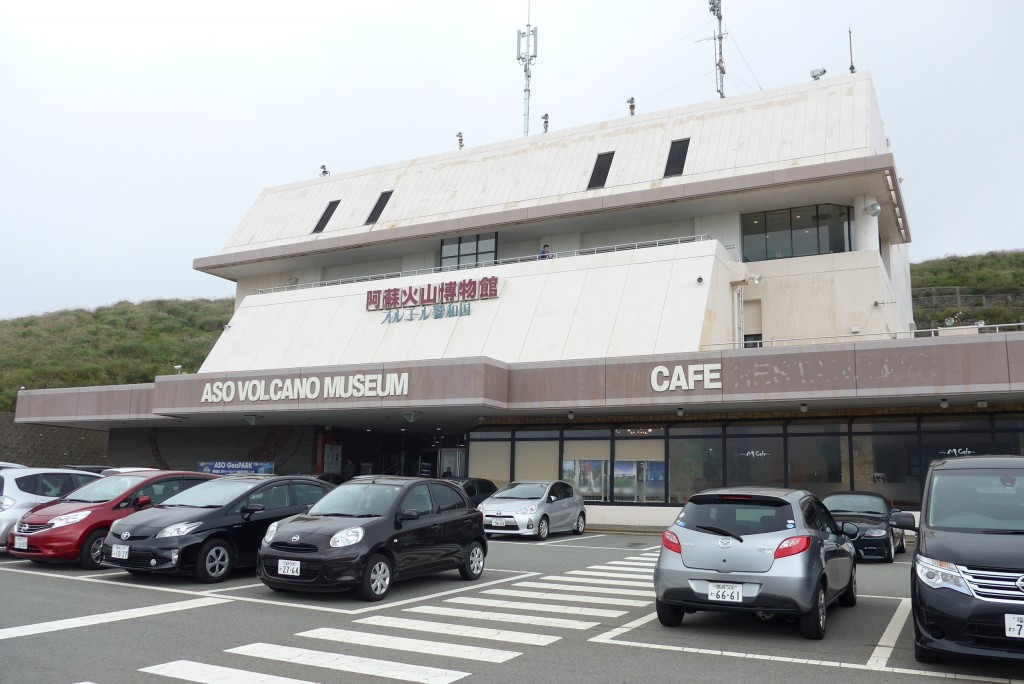 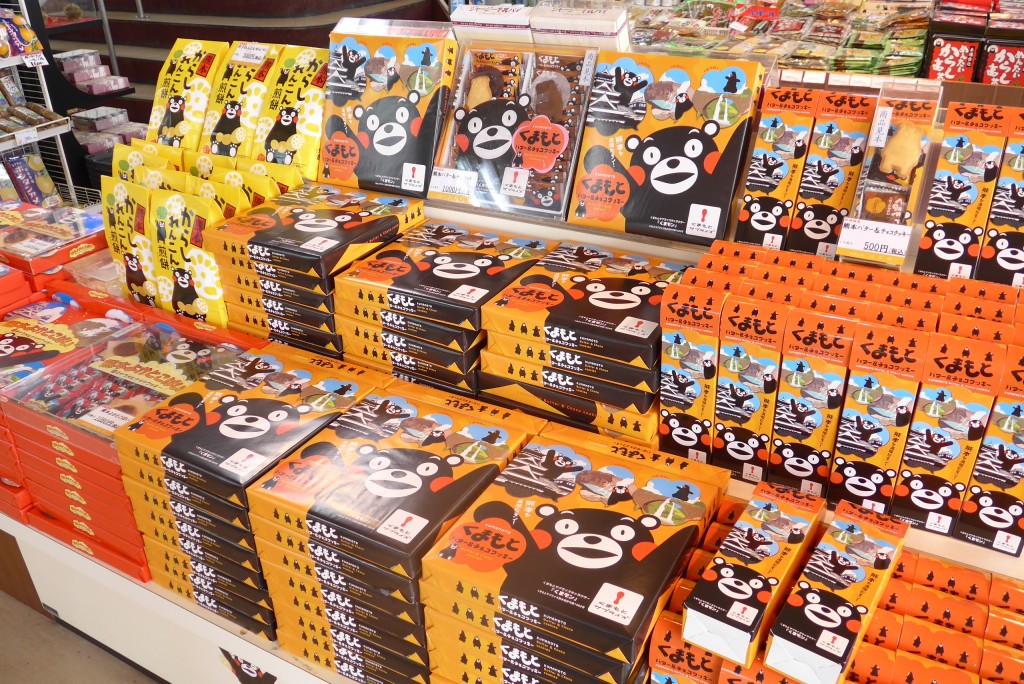 Many Kumamon souveniers to buy in the Tourist shop at Mt Aso.

After soaking in the views at Mt Aso, it was already mid afternoon, and we decided to make our way to Uchinomaki town to try this famous beef bowl shop called Imakane Beef いまきん仕出し店 (366-2 Uchinomaki, Aso, Kumamoto 869-2301, Japan 0967-32-0031). Unfortunately, the queue was so long, there were at least 15 tables in front of us, and it was already 3.30 pm, so we decided to just head straight to Kurokawa Onsen to walk around. If any of you ever make it here, please tell me how it tasted! 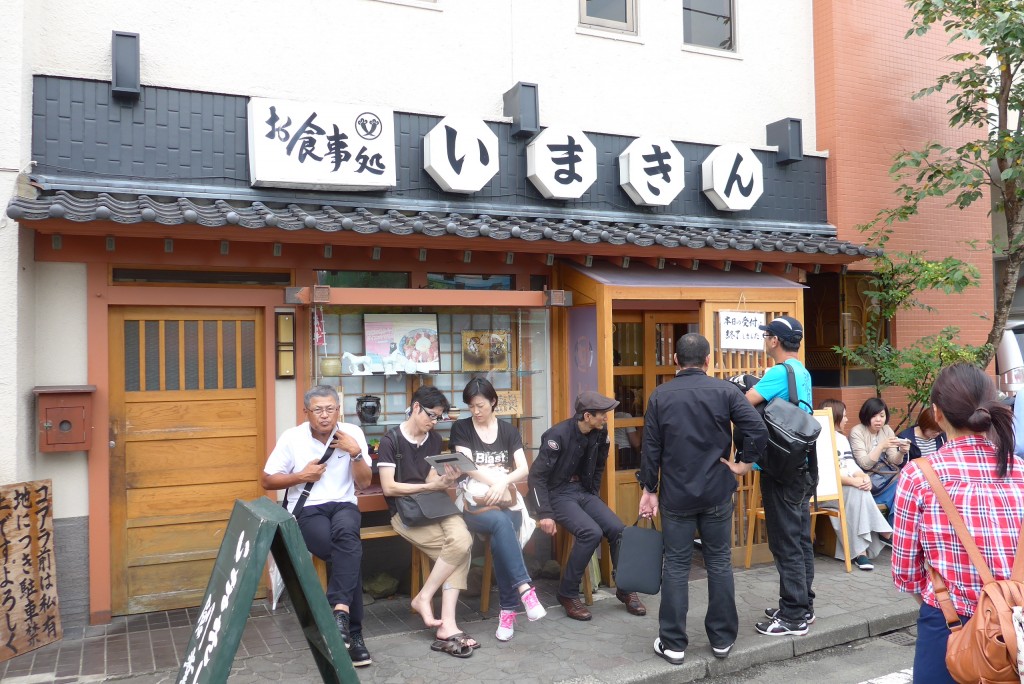 We finally arrived at Kurokawa onsen, and it is not exactly the easiest place to drive through with a car, but we managed to squeeze through the small meandering roads, and parked our car at one of the parking spaces and walked around. This onsen town seemed to still have maintained its look and feel from the yesteryears, and seemed very uncommercial in a great way. The sound of the waterfall and river flowing underneath was so calming to my ears. 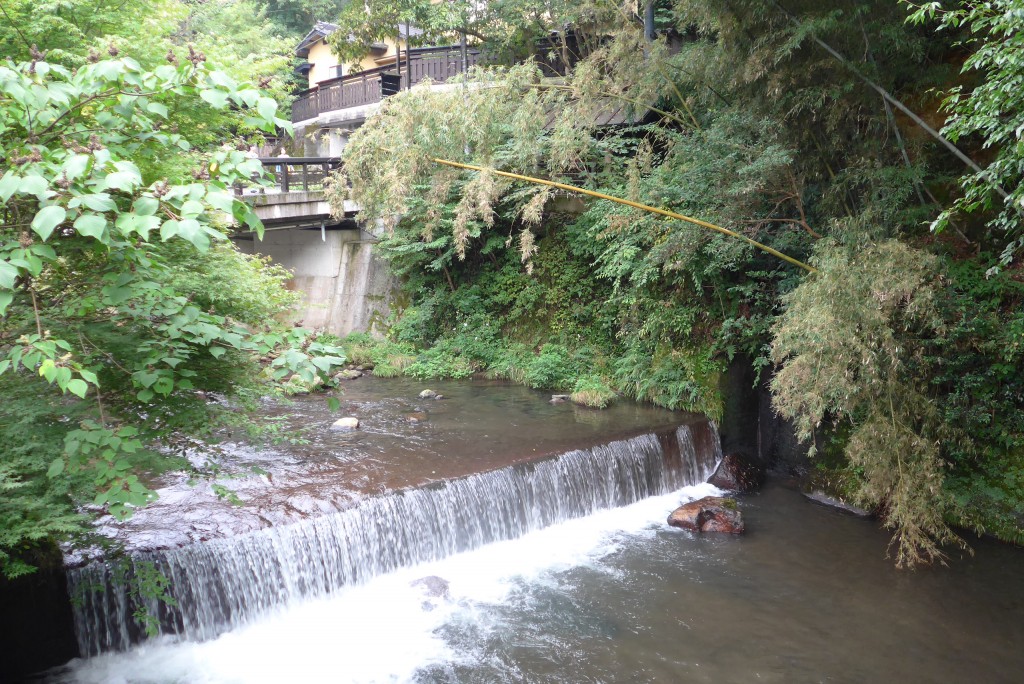 River flowing through the small town of Kurokawa. 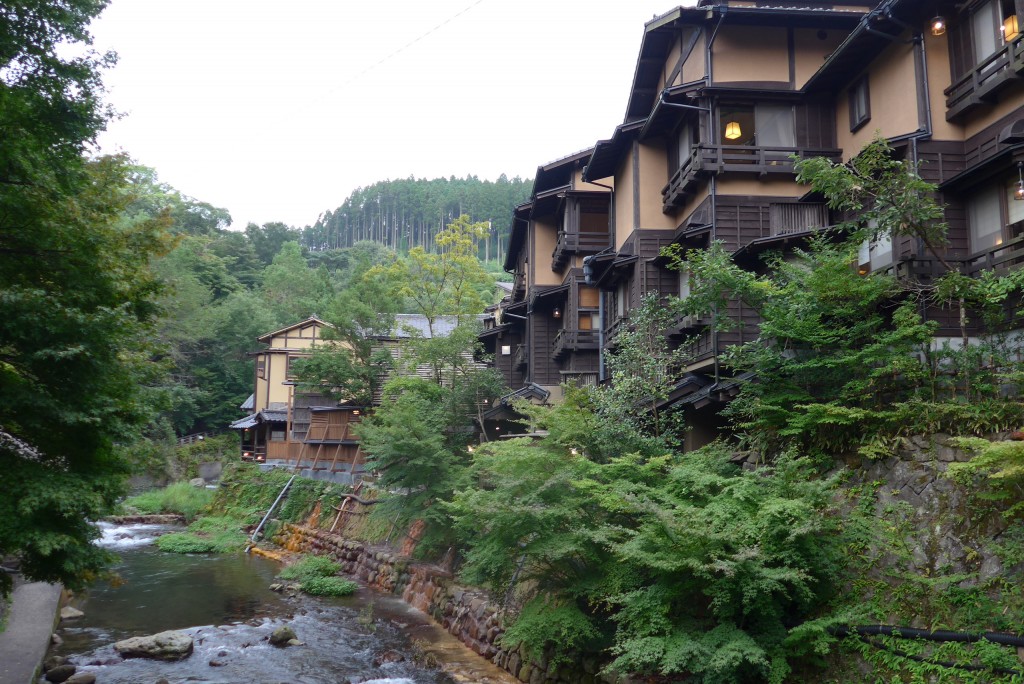 Many earthen colored ryokans where one could stay in.

One of the best discoveries here was Sugi Yohoen, a shop specialising in honey, but what we really love is their Kyoho & Honey drink, which you just need add cold water to 2 tablespoons of it and it’s so refreshing! Remember to buy this when you are here! 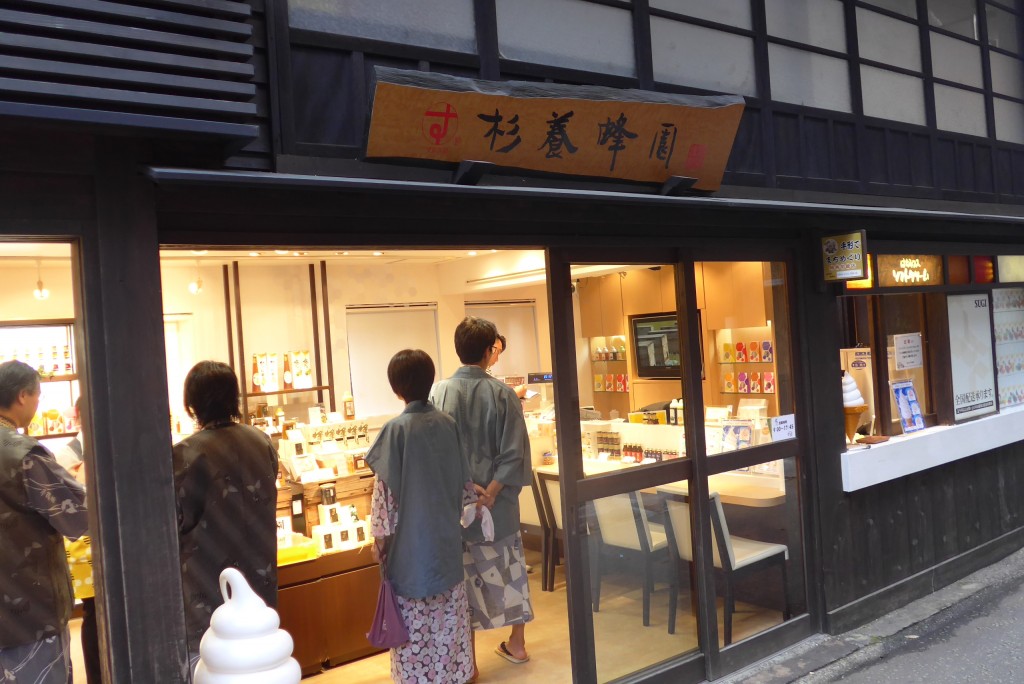 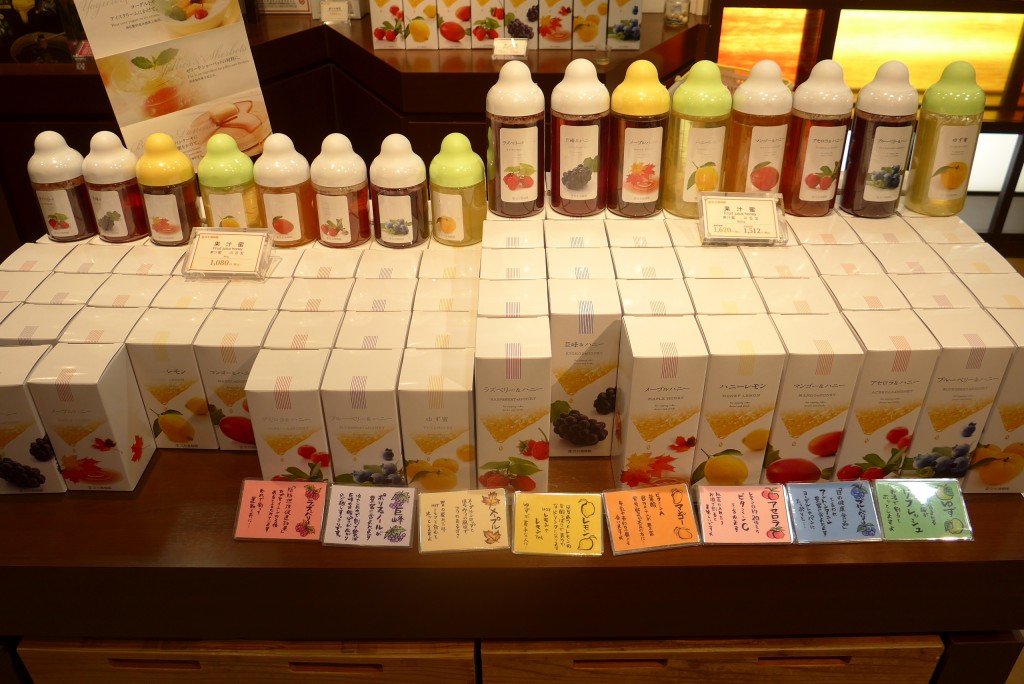 Another must check out is Patisserie Roku famous for their cream puffs and swiss rolls. I personally think the filling is amazingly creamy and not too sweet but the texture of the cream puff was a slight let down, I didn’t think it was crisp enough. In fact, the swiss rolls were my favourite, so try a slice the next time you are here, or just get a variety of everything like greedy me! 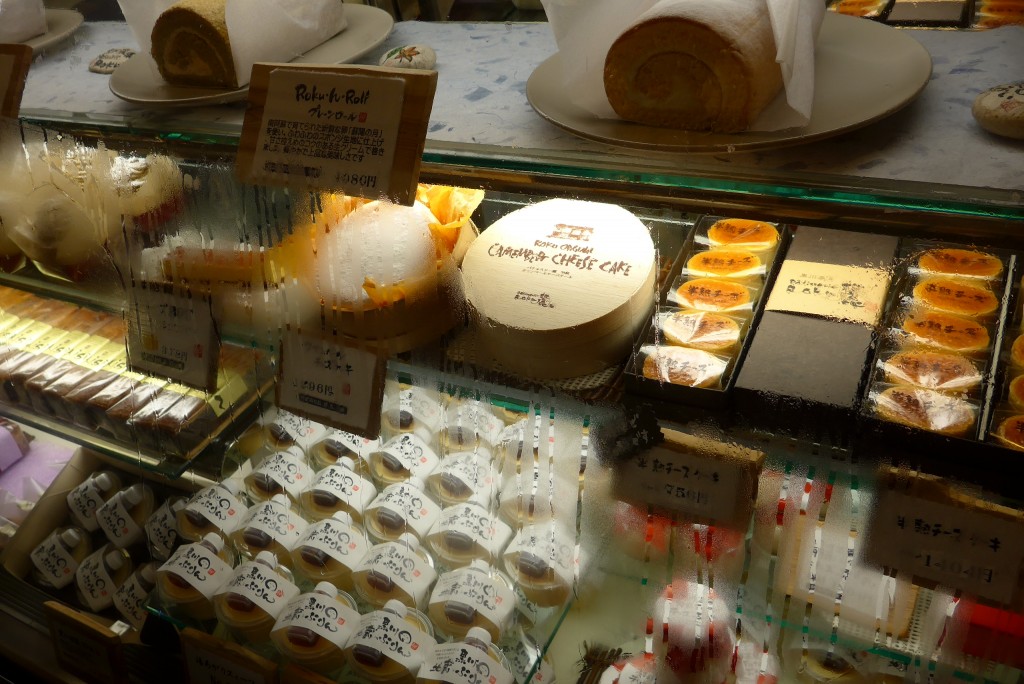 Display of tempting soft rolls and cream puffs in Roku. 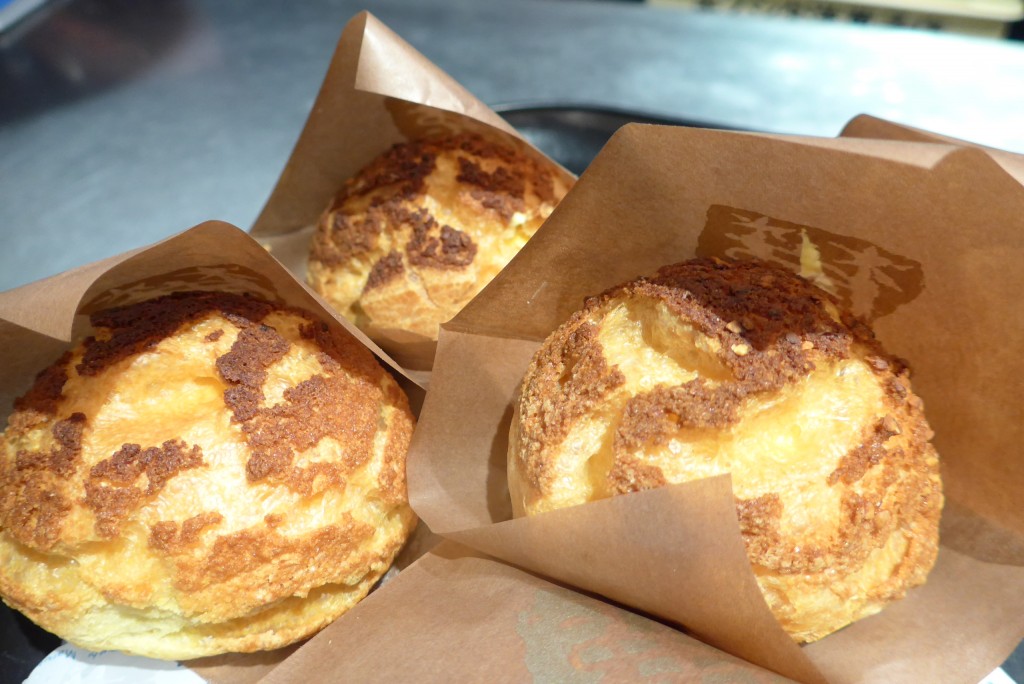 A pity we did not have time to go onsen hopping, but if you visit Kurokawa, remember to get the Nyuto Negata, which is like an onsen pass (costs 1200 yen) to visit one of the many participating hotel onsen baths in this lovely quaint town. 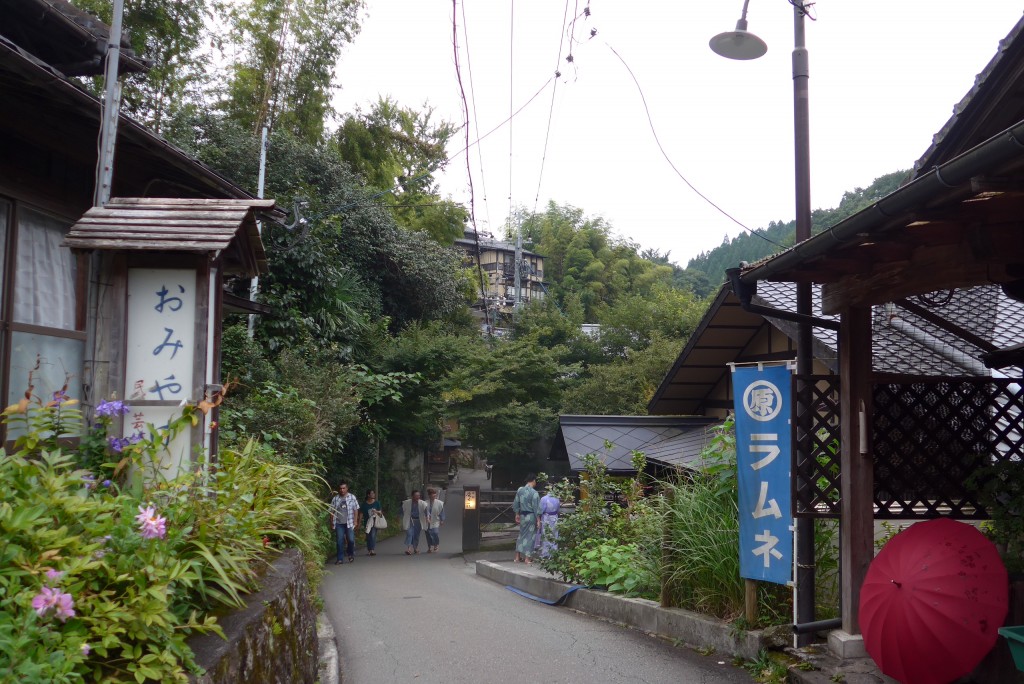 This short day trip to Mount Aso and Kurokawa onsen was quite interesting, a little tiring perhaps from the driving but otherwise, the views were breathtaking and if anything I wished the day could be longer for us to enjoy more of the views.

Driving tips (Telephone number of spots mentioned above for GPS):

There is a car park not too far away after passing this, park there and walk around the town of Kurokawa. 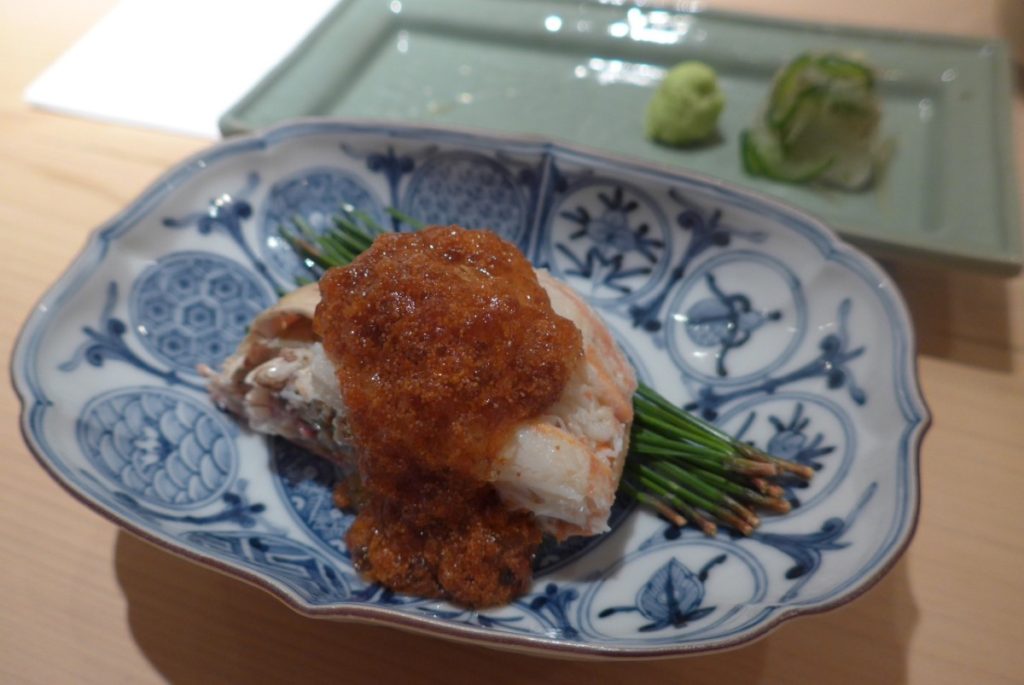 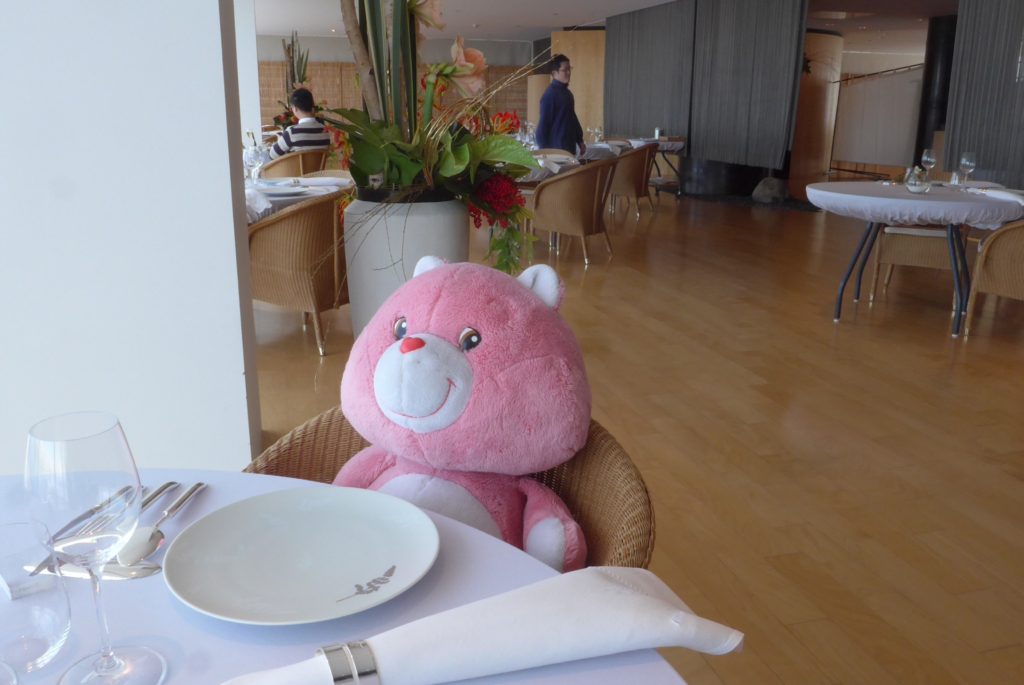 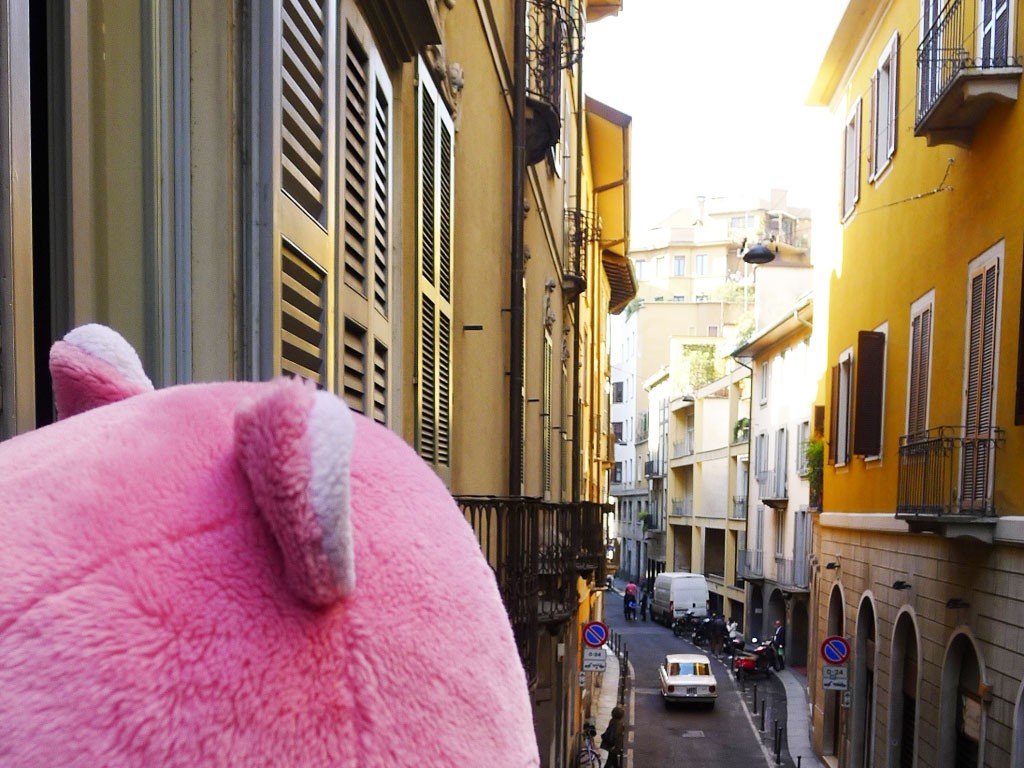