Zermatt skiing is very popular with many given it’s the highest resort, with sure guaranteed snow, and one of the few or only places in the world where you can even do summer skiing! Even when we were there, and the whole of Europe barely snowed for the month of December, Zermatt was still decent enough for skiing though not perfect powder snow conditions like Japan, but we couldn’t complain given the sad snow situation in the entire Europe. There’s a total of 360 km of pistes in Matterhorn alone and it’s right next door to their Italian neighbours, which means you can literally cross country and head to Italy to ski and eat! 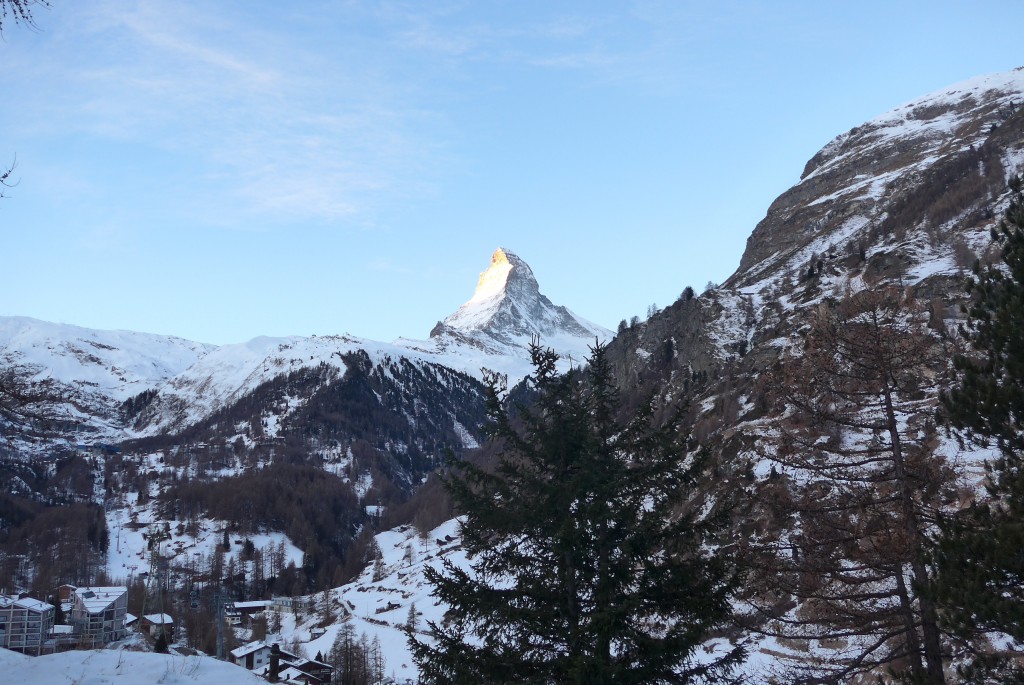 Golden tip of the Matterhorn at sunrise. 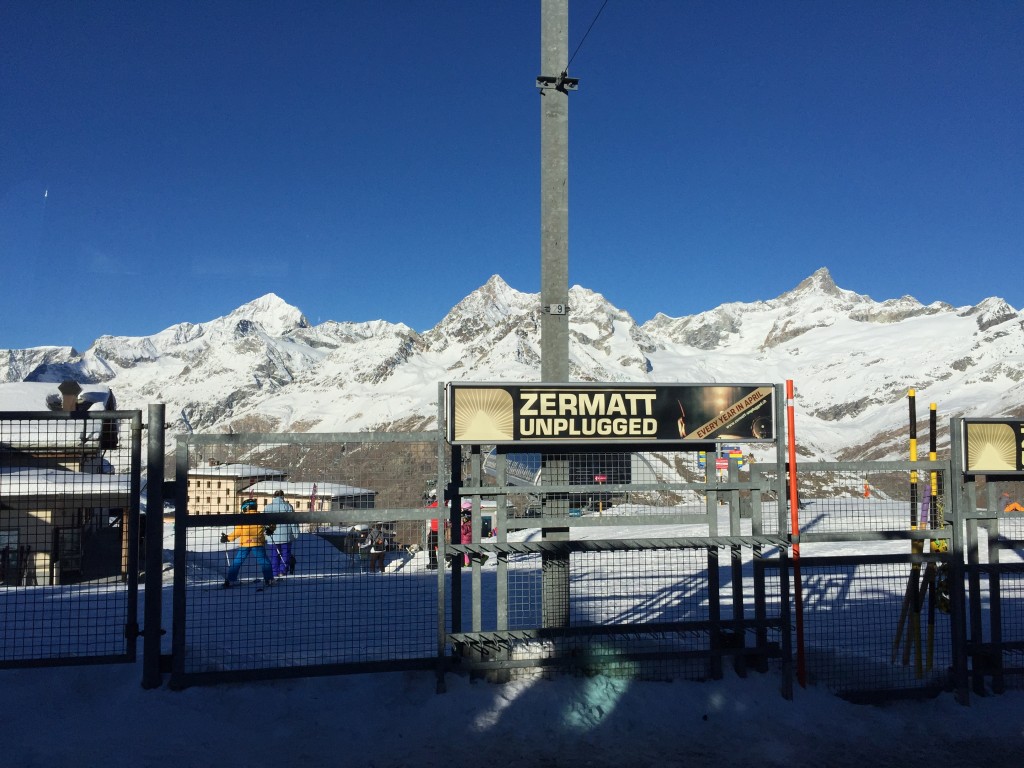 The ski lifts go to the highest heights at 3883 m where the Matterhorn Paradise is and Zermatt in my opinion has one of the most advanced and elaborate infrastructure in terms of getting you up the slopes. But be warned, the slopes here aren’t that easy, there’s barely any greens, and no bunny slopes. Most range from blues, reds and blacks, plus the runs can be narrow for some but there’s still 1 or 2 areas that beginners can learn seeing the number of young children learners. The plus point it’s a fabulous gourmet paradise with more than 50 mountain restaurants just to choose from during mid ski breaks. See my next post on that! 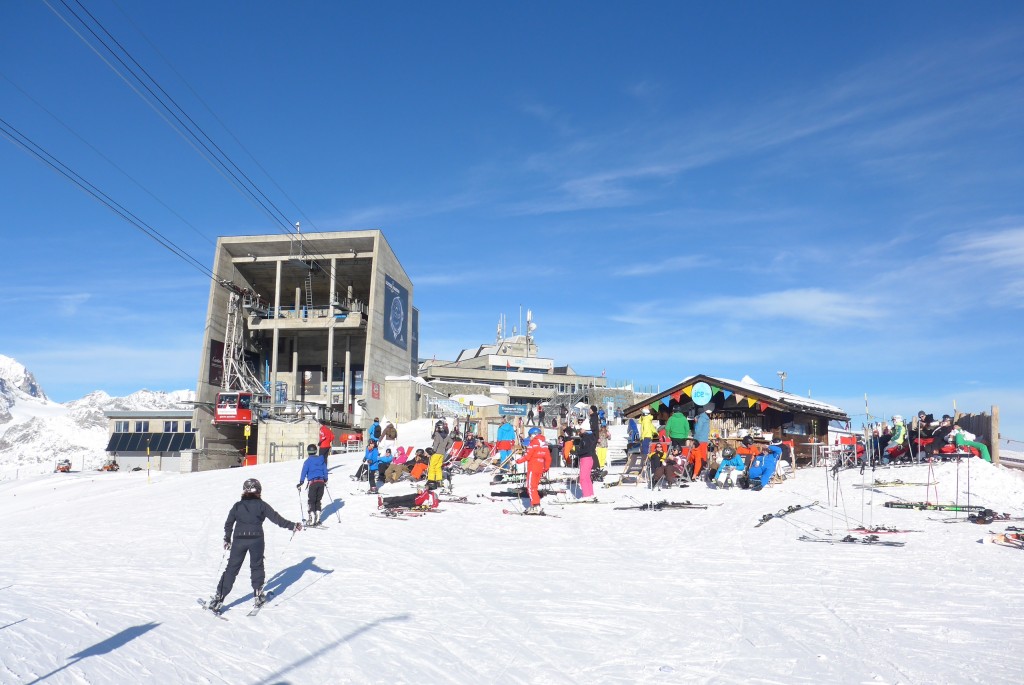 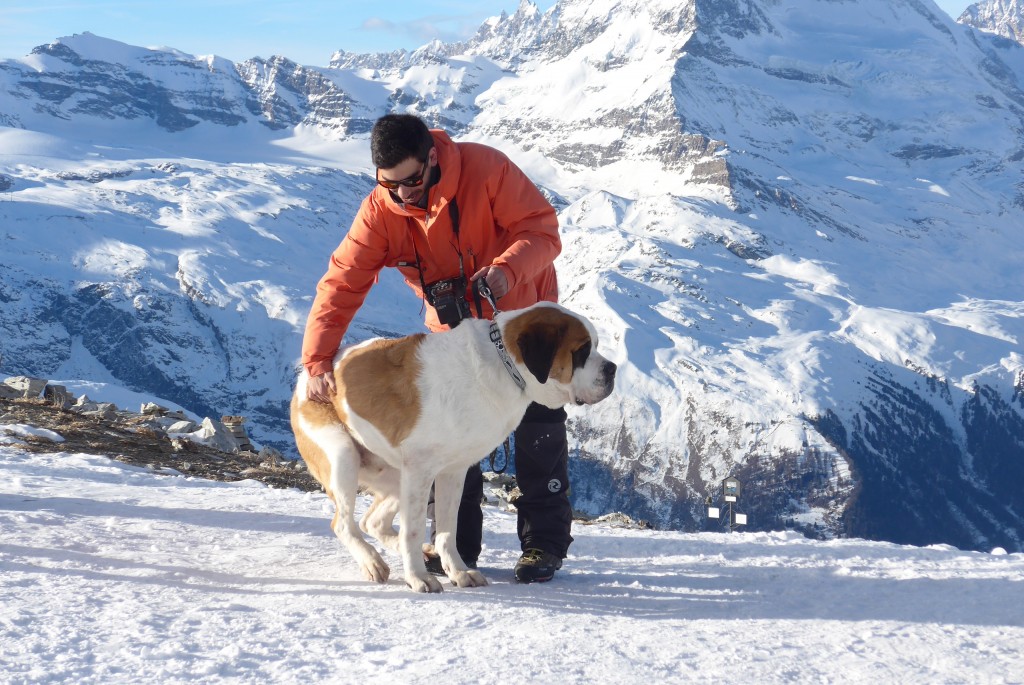 Don’t forget to take a picture with one of the cute St Bernards walking around with their guide.

Transport – how do you get here and get around?

Firstly, transport can be a real X?#!! to get here. Being a car free resort with only horse drawn carriages and electric taxis as the key mode of transport in the town, any automobile that uses an engine is not allowed in Zermatt because of concerns for air pollution. The main ways to get to Zermatt is by train, cable car or car but the last point of car drop off is at Tasch, followed by a 20 minutes car ride into the town of Zermatt. Taxi Fredy is the main company to pick people up from outside Zermatt into the edge of town where many electric taxis can be found. Taxi Fredy contact number is +41 27 967 33 66, and website www.taxi-zermatt.com. The town of Zermatt which is lined with shops, bars and some hotels, is not very big, but with luggages, it will be advisable to hop into any of the electric taxis you see there to bring you to your place of accommodation.

But be warned, the electric taxis aren’t cheap, an average ride will cost you minimum 10 – 15 swiss francs, for a 5 minutes ride. 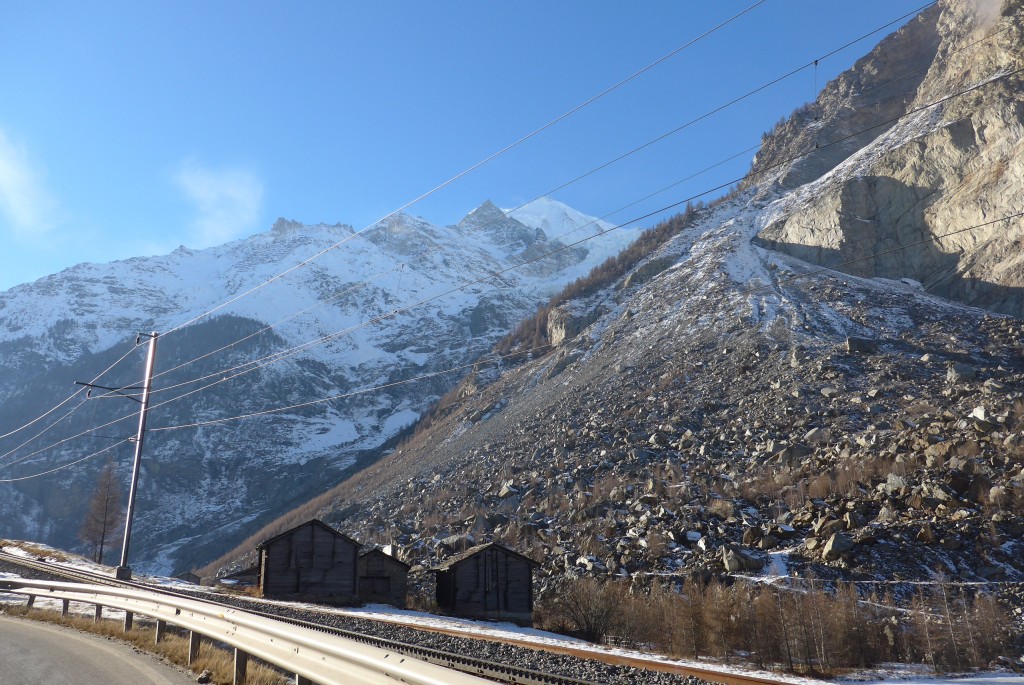 Zipping in Taxi Fredy around the rather windy slopes to Zermatt town. 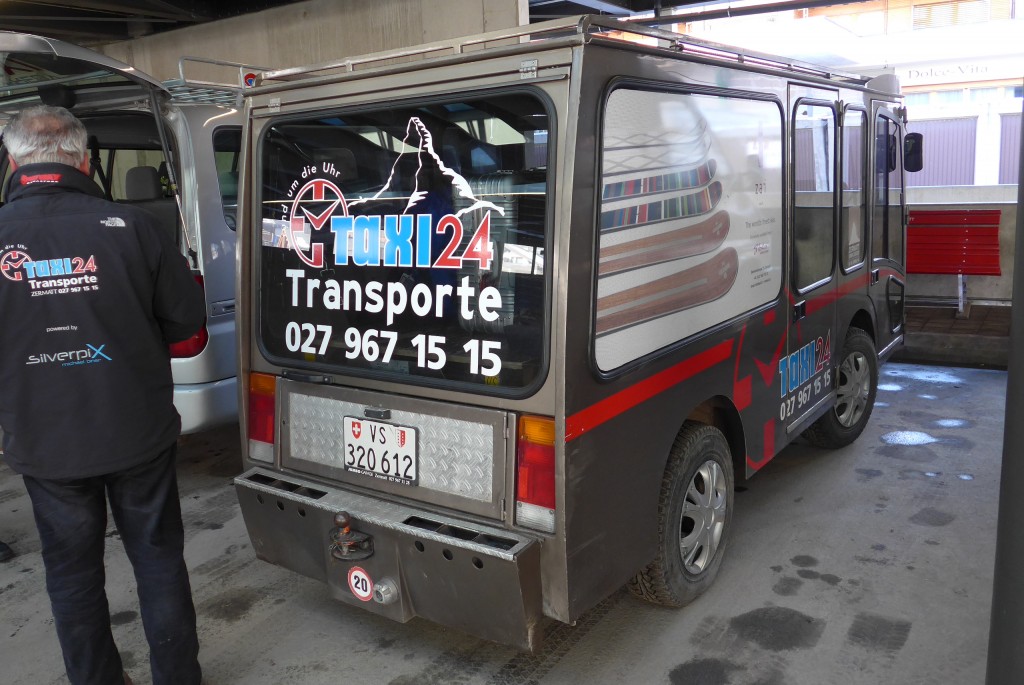 One of the many electric taxis available in Zermatt. 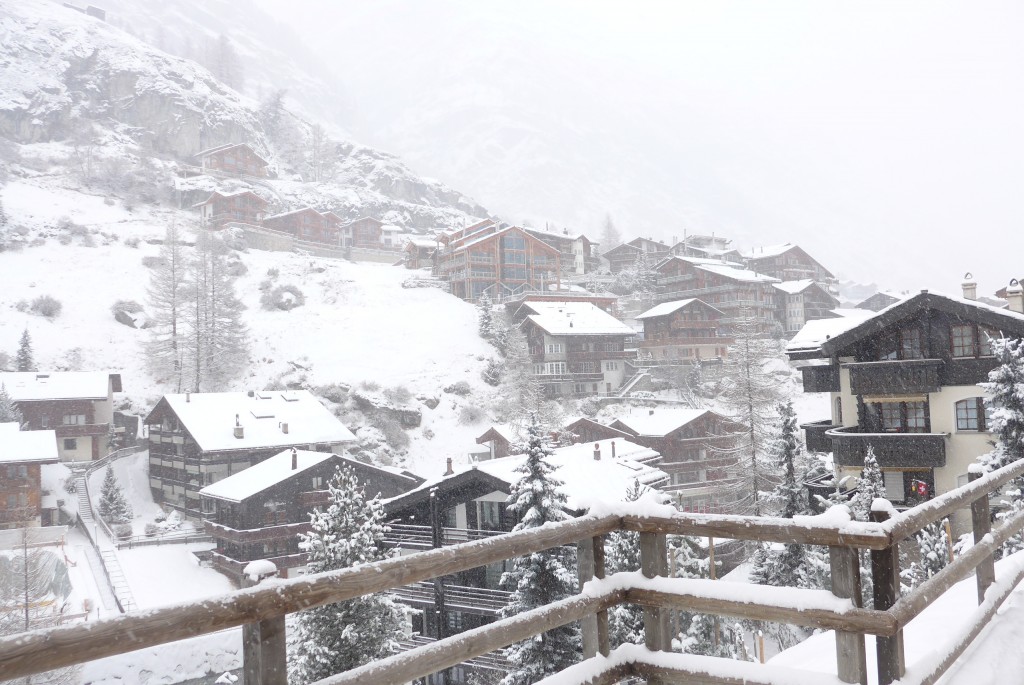 Zermatt town finally covered with snow – on our last day!

Stay – where to stay?

Zermatt has a good range of apartments, chalets for larger groups and hotels depending on what you prefer, but from what I can see, there aren’t that many ski in ski out locations. So be prepared to walk to get around.

One thing we found though it’s really hard to find 5 bedroom apartments in Zermatt within a budget of under 25,000 CHF, but thanks to YW through Alpine Guru, we found Chalet Ecureuils which was 23360 CHF with self catered option. Yes, when enquiring on chalets and apartments here, always ask if the rate is for fully catered or self catered. You can really save some money if you intend to dine out and cook in yourself, so the fully catered option is really not that necessary. And remember if you prefer to stay in town, try not to stay too near the Catholic church in town, as the clock tower rings every hour and can get really noisy. 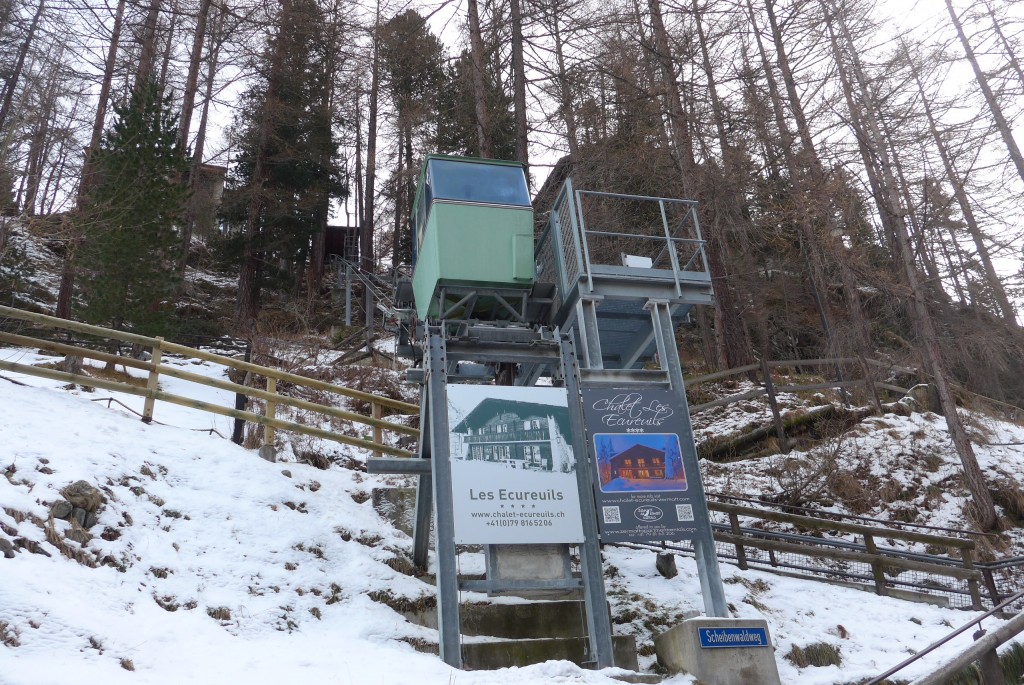 Funicular exclusive for Chalet Ecureuils and our neighbouring house. 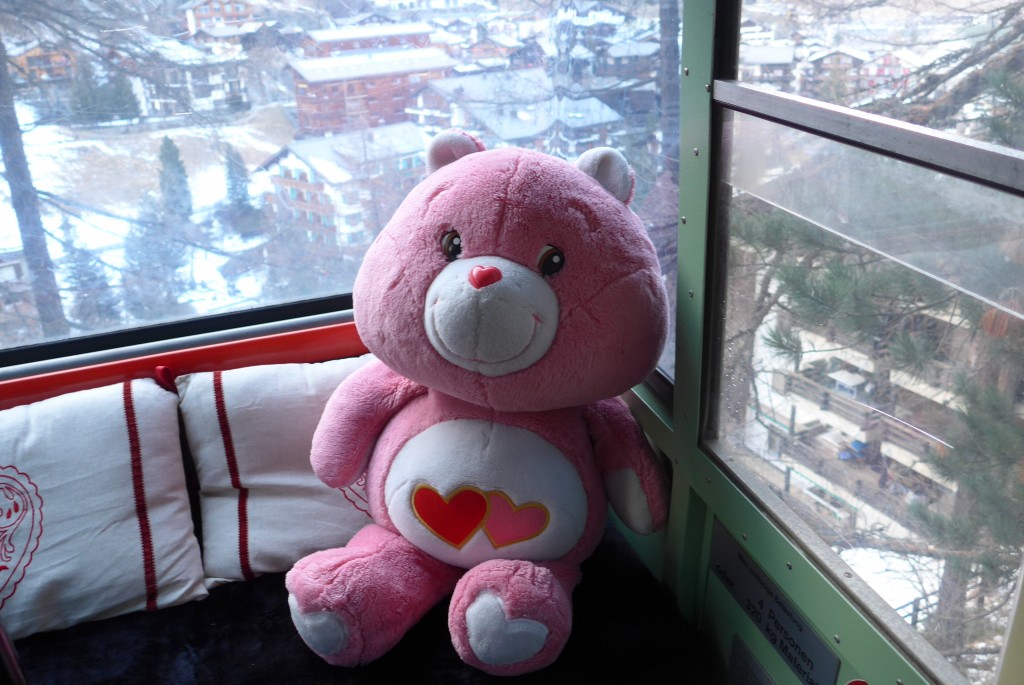 Me in the funicular, so fun!

According to Stuart, the owner of Zermatt Apartment Rentals that operates this property amongst many others in Zermatt, he was telling us Chalet Ecureuils was built in 1964 apparently by one of the first explorers of Zermatt. There’s a lot of interesting history to this unique property with its own exclusive funicular shared with the neighbouring house. It seemed troublesome to us initially we had to use this to go up and down daily, but beats walking up the long and windy stairs. And the plus point it’s both a 5 minutes walk to the main Klein Matterhorn departure station and to town. 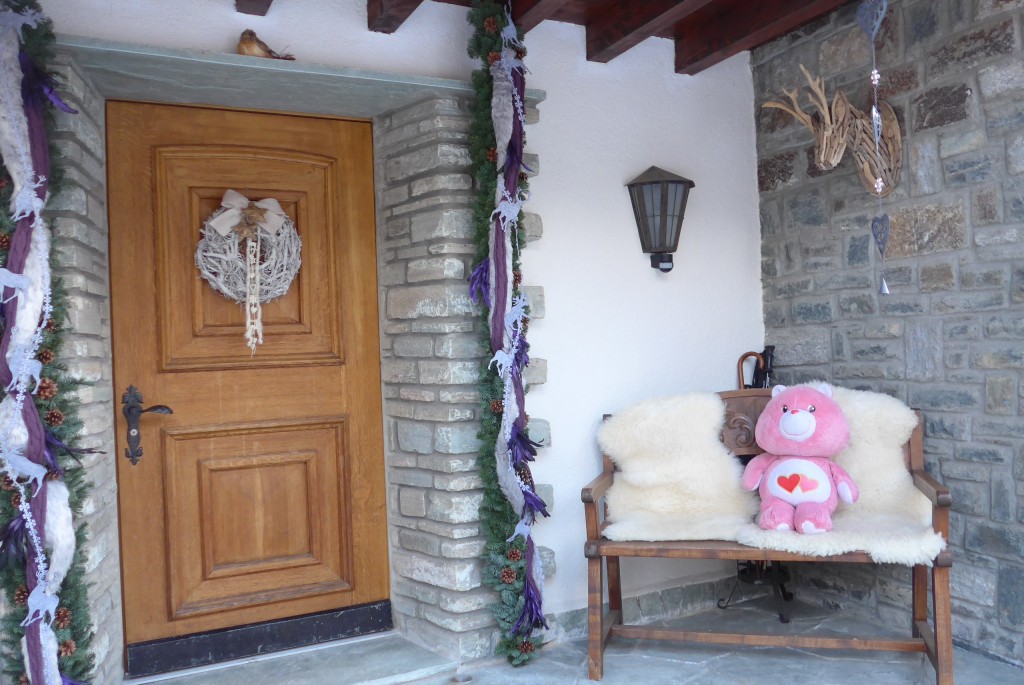 Outside our front door of Chalet Ecureuils. 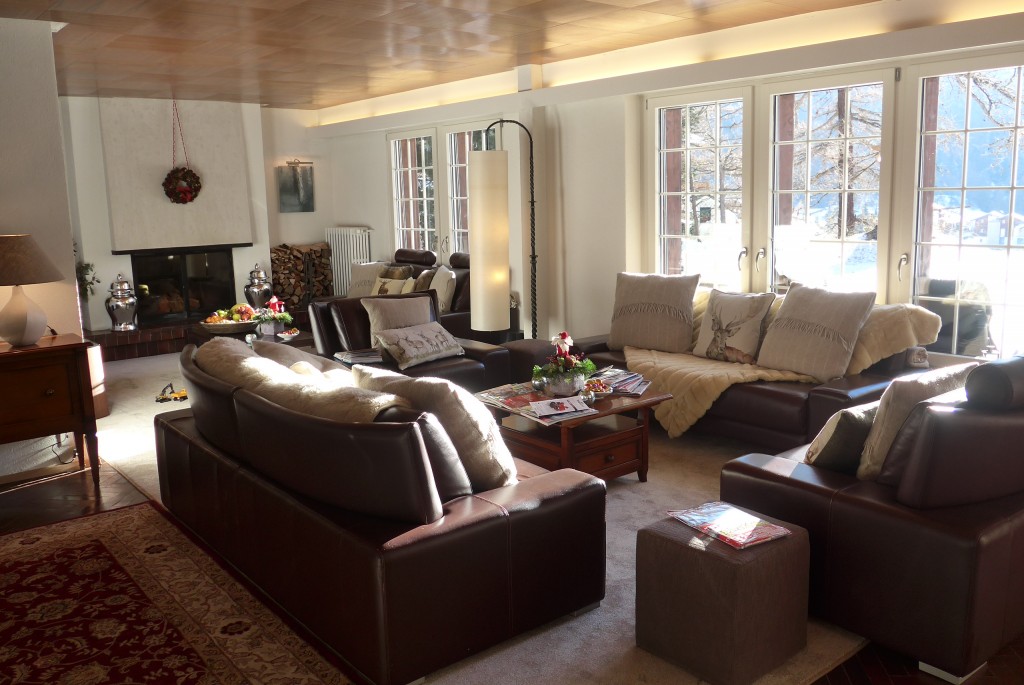 Cozy fireplace in the living room. 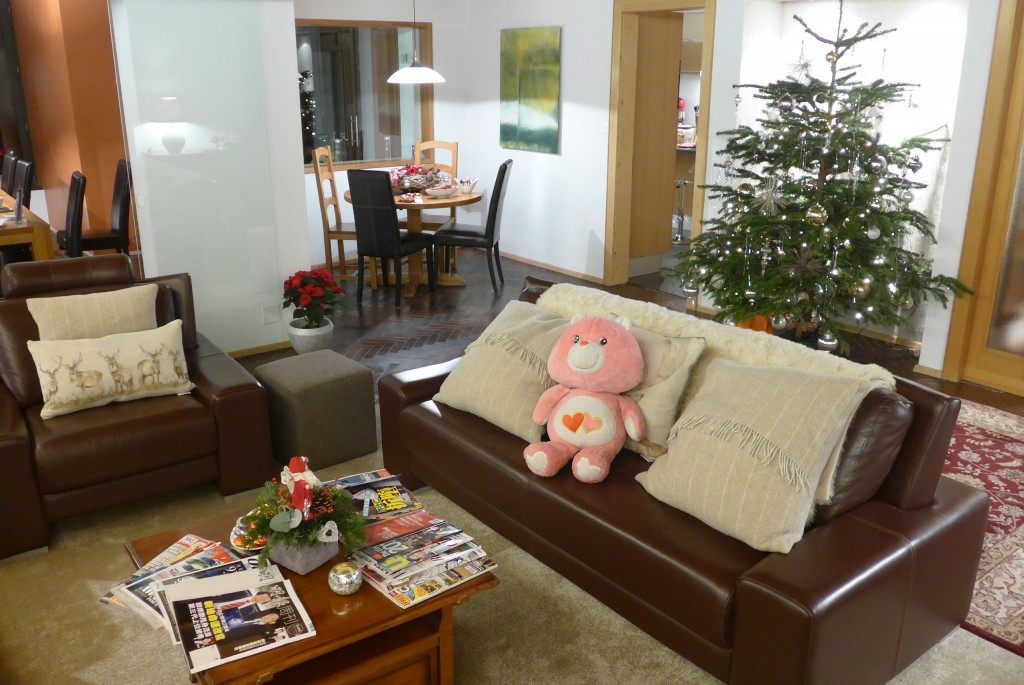 So nice to finally relax here after the long journey to Zermatt. 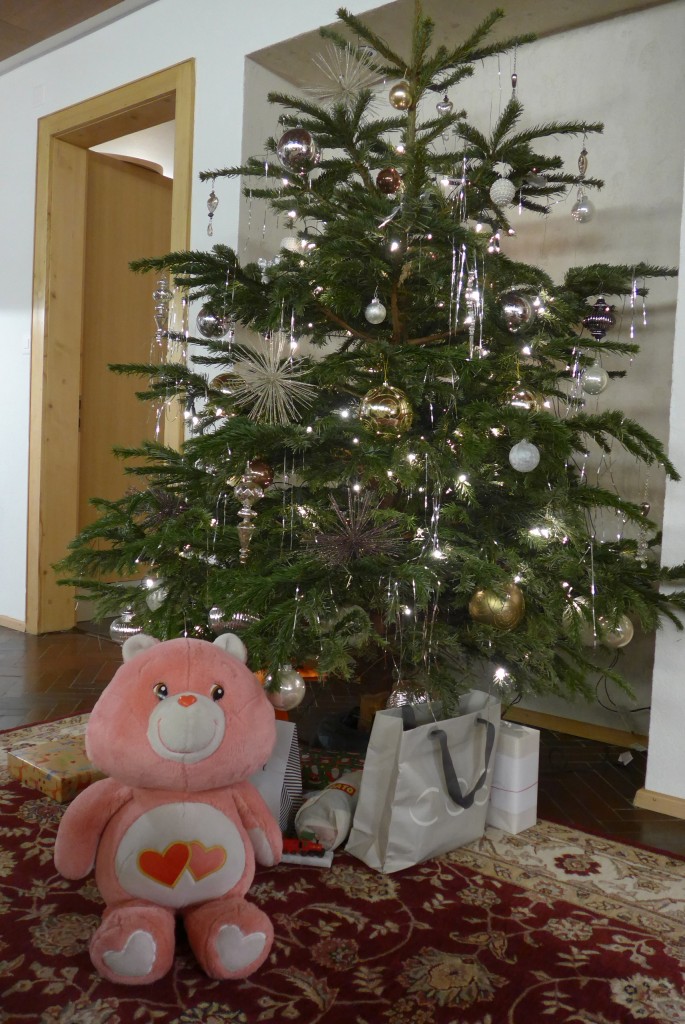 Getting into the festive spirit settling around the Christmas tree with our gift exchange presents. 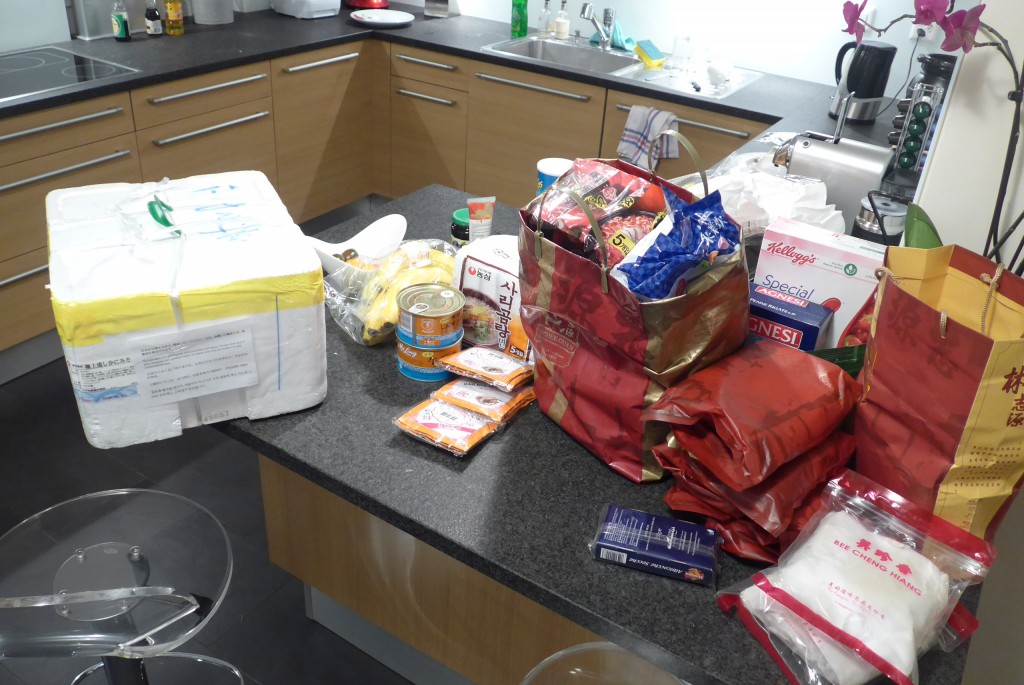 Japanese beef all the way from Tokyo and our assorted Asian groceries from Singapore and Hong Kong. 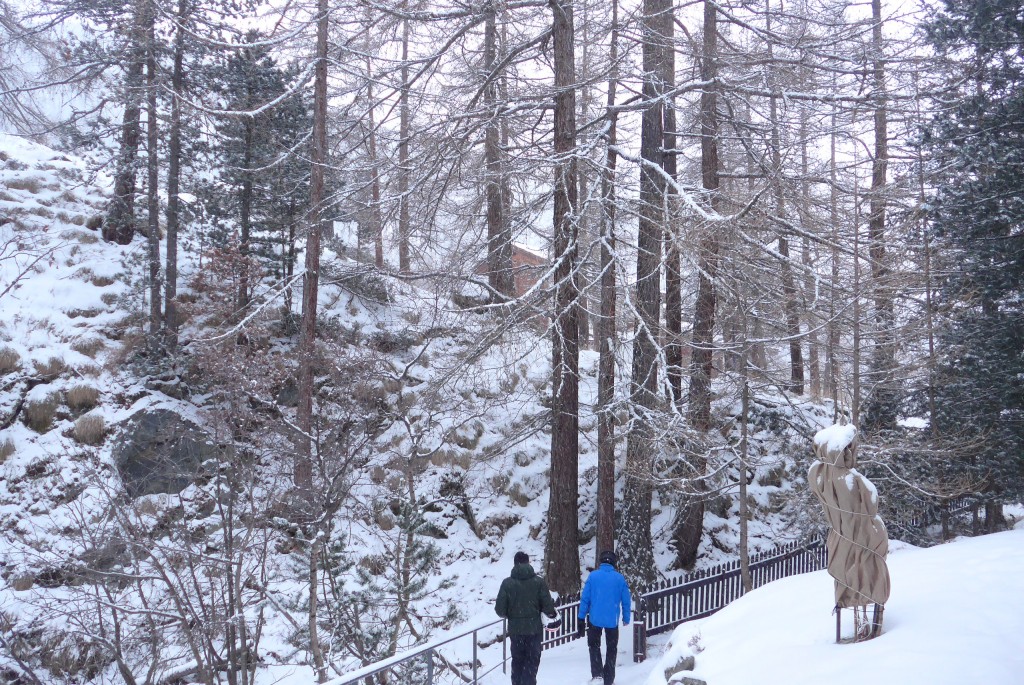 Snow covered trees and slopes finally on our last day in Zermatt.

There’s a few main ski schools here, and Alpine Guru arranged for us to get lessons with Claire from Stoke. We paid 259 CHF daily for a 3 hour lesson. I think the most convenient spot for ski equipment rental would be Dorsaz Sports just in front of the Klein Matterhorn base station, as one can rent and leave the ski shoes and poles in their lockers daily. Sure beats carrying them around! Rates for the ski shoes can range depending on 2 seasons old or getting the latest season. I think what seems expensive were the ski passes, which probably explains why Zermatt tends to be known as one of the more expensive ski resorts. 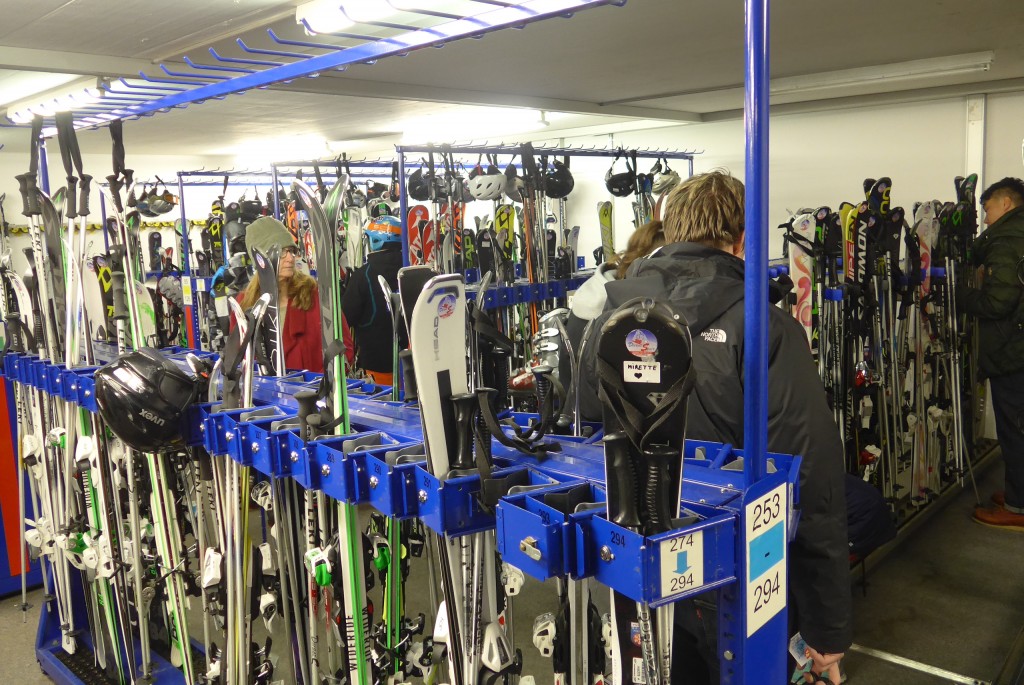 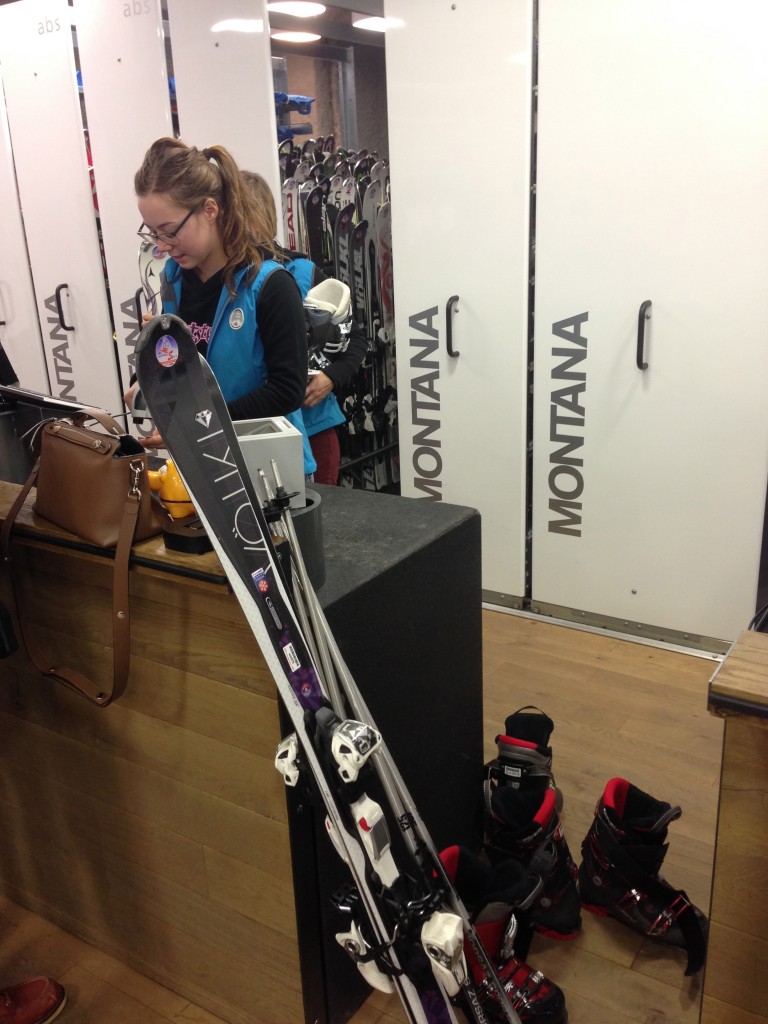 Paying for the rental of the ski equipment.

Zermatt town is pretty quaint and has a great selection of shops, restaurants, bars, cafés and hotels gathered around the attractive main shopping street, Bahnhofstrasse, which runs up the valley from the train station. And given we were here over the Christmas week, it felt especially festive seeing horse carriages and the various sitting Santas on the buildings. Given the car free zone here, it’s quite nice to stroll along here freely on the roads, other than watching out for the electric taxis and occasional bikes zipping by.

The town is not large but with the condensation of shops, there’s plenty to distract you by. My favourites would be Bayard which has an amazing selection of ski wear and accessories, and my favourite Mykita sunglass shop (opened by a Japanese) and even Moncler has a boutique here. Don’t worry about groceries, as there is quite a few large supermarkets to buy from, but my advise is to bring up your own Asian food as don’t expect them to have much of that here. 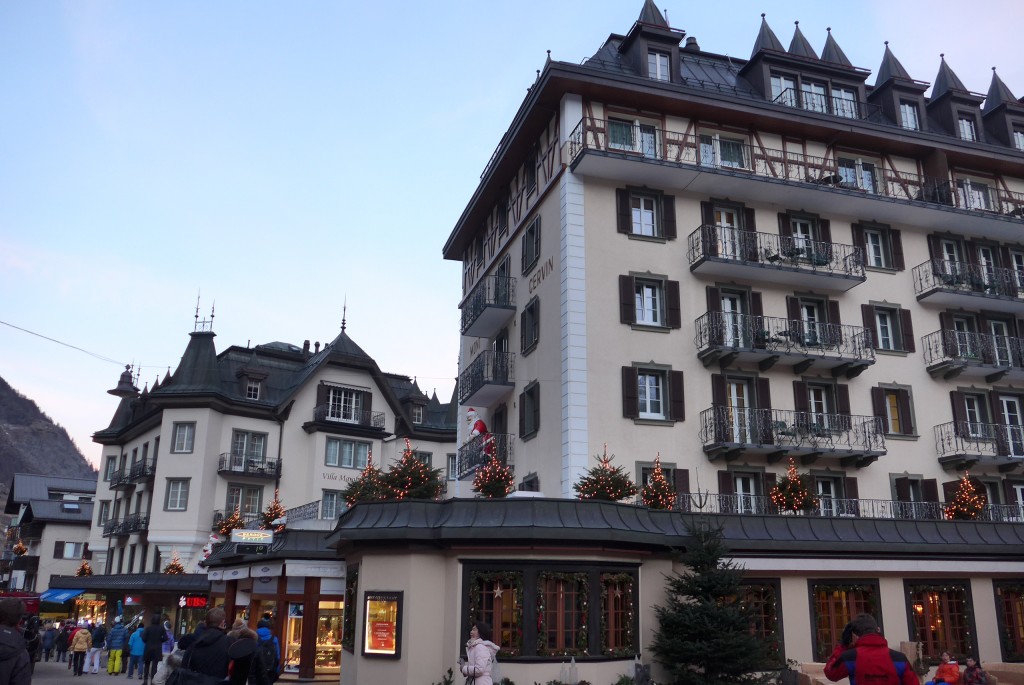 Strolling along Bahnhofstrasse, the main shopping street in Zermatt. 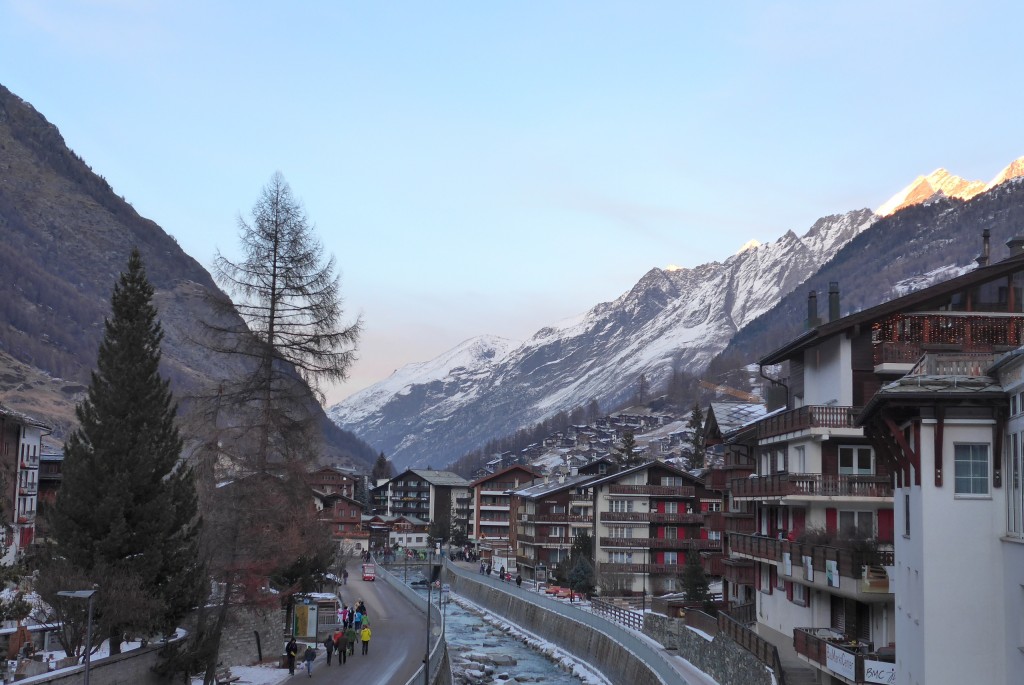 River Vispa which runs nearby to the town. 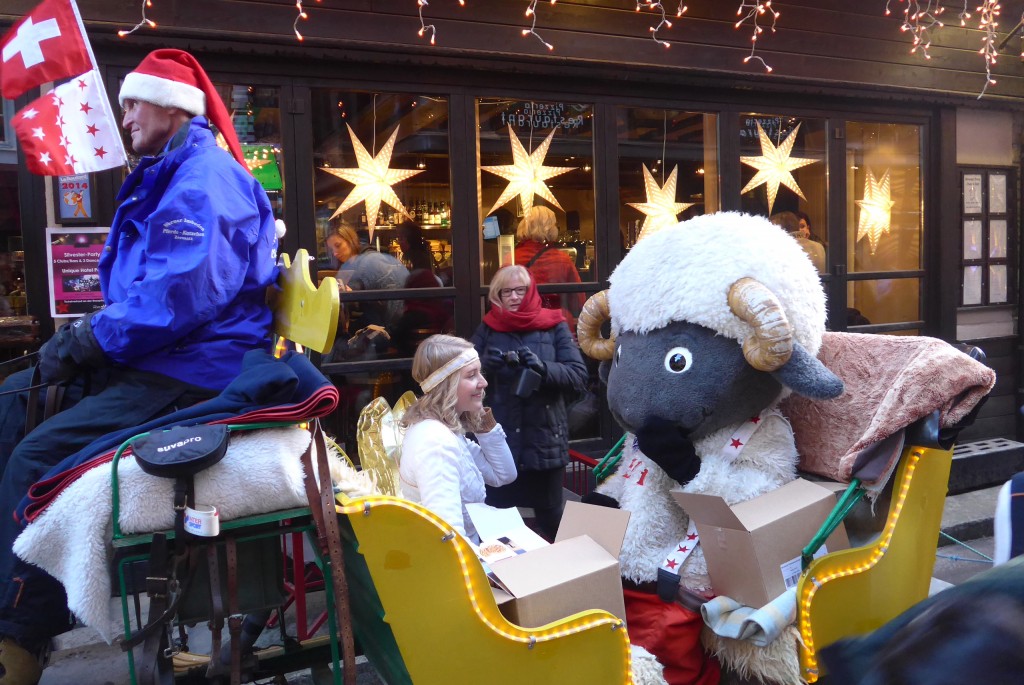 Cute carriage with their mascot sheep sighted during Christmas week in Zermatt town. 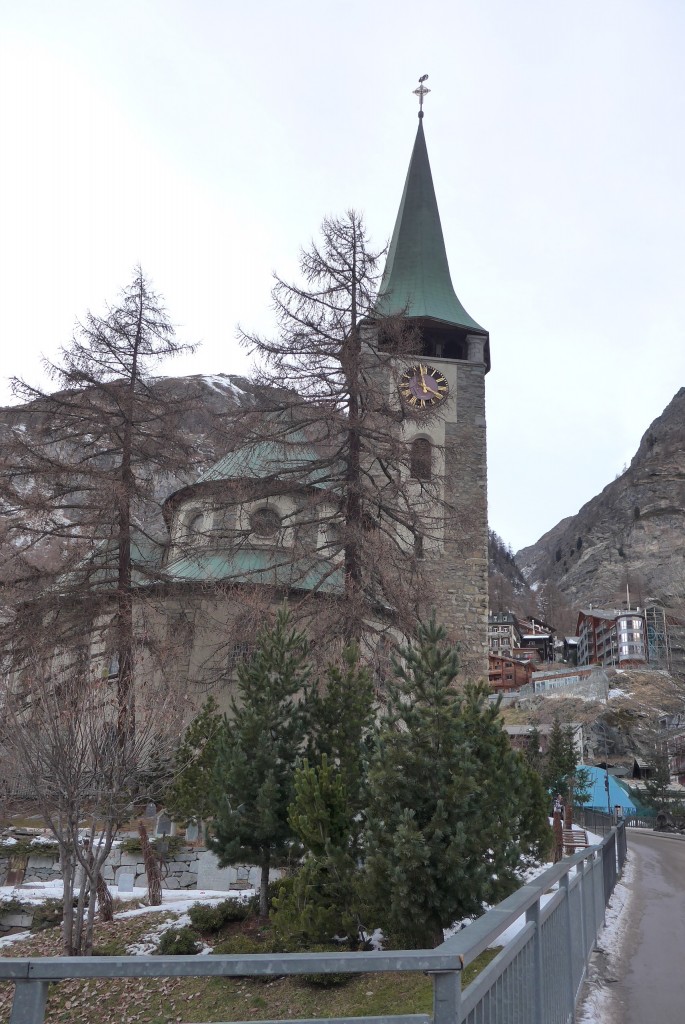 Would I come back again to Zermatt? I think maybe not till I have explored other ski resorts first. I think the travelling to here and getting around Zermatt to the ski slopes in general can be rather tiring, and getting to many of the mountain restaurants though is worth it, is exhausting! But I would still recommend it as a place to visit at least once if you are an avid ‘foodie skier’ like me, due to the gorgeous views of the Matterhorn, great variety of ski slopes and mountain restaurants. 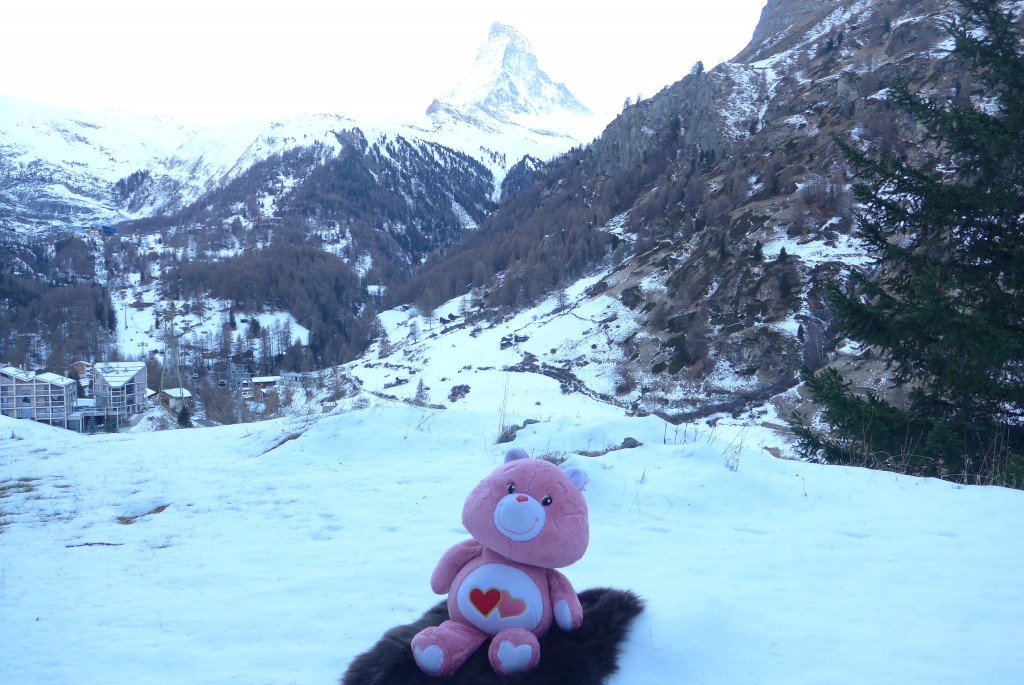 Enjoying some snow on my last day in Zermatt. 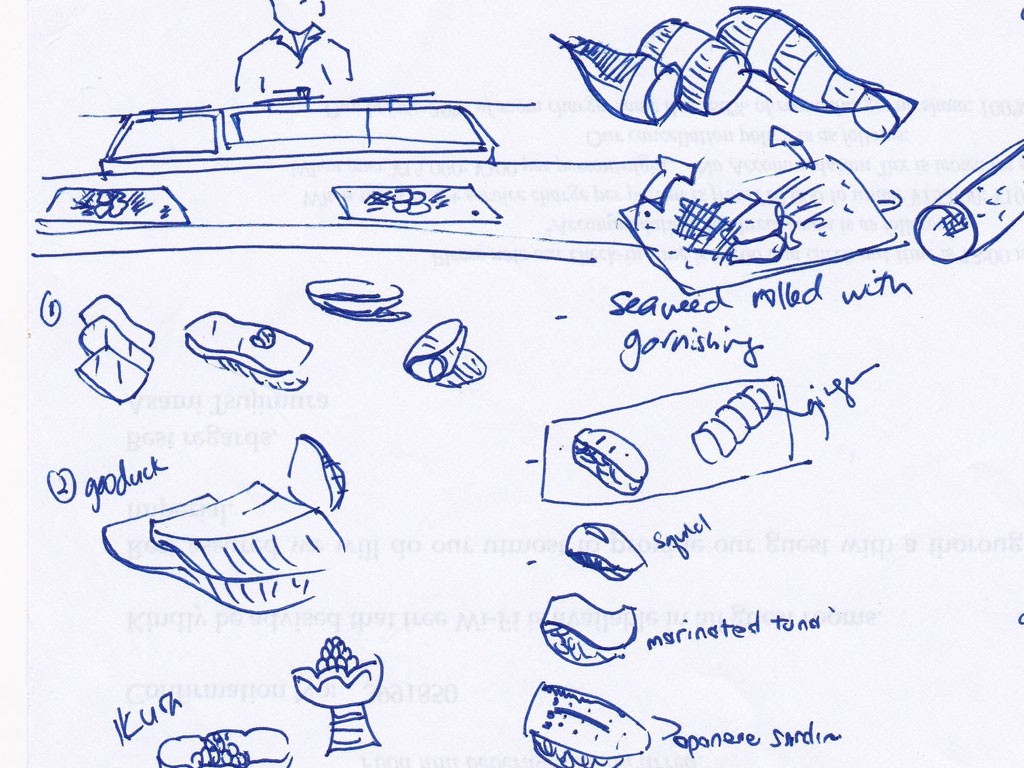 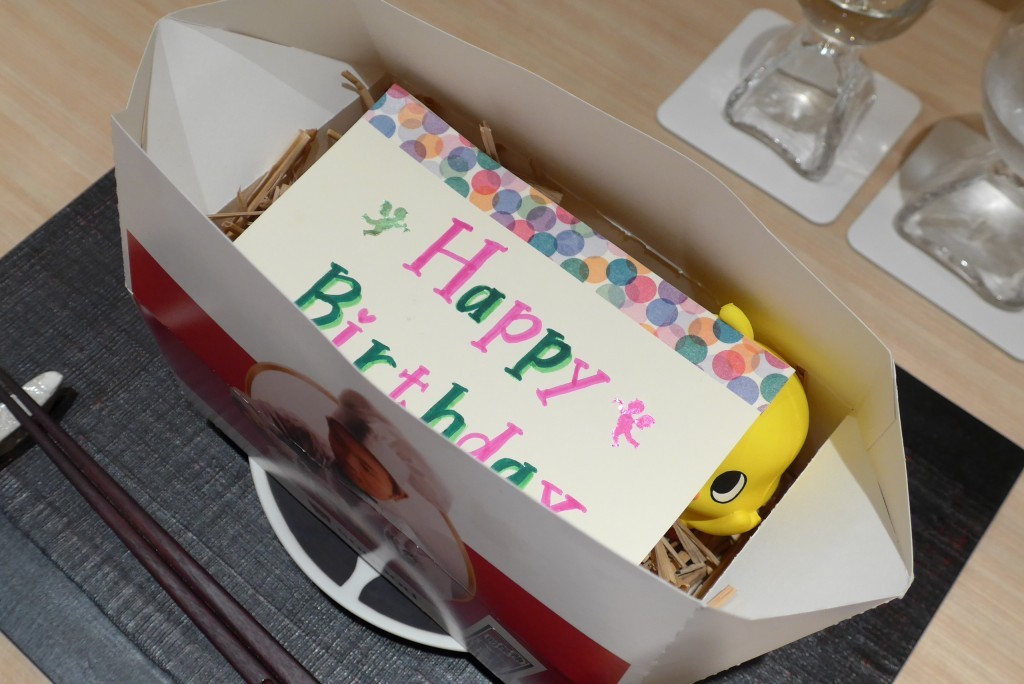 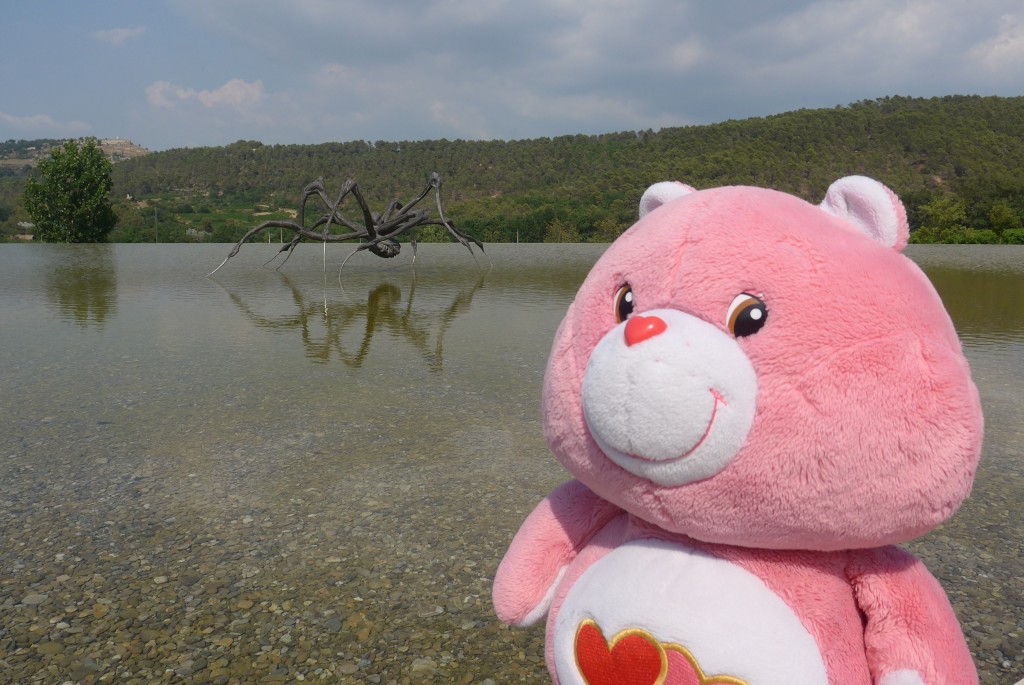